Earlier this week, I was asked by the Knicks blogger who runs the imminently readable “What Would Oakley Do?” website to participate in the first annual “People’s NBA Trade Value Column” — the NBA blogosphere’s response to The Sports Guy’s annual NBA trade value column at ESPN.com.

If you realize nothing else about WWOD, know that it has everything to do with a chain of carwashes owned by “the roughest and toughest power forward ever to own a chain of carwashes,” which met with hearty approval from The Bob Boozerjinx editorial board.)

Also know that, while I don’t mind The Sports Guy Bill Simmons so much, there is much about ESPN coverage of the NBA that I find truly abominable, so I jumped on board to be the Bucks’ voice in The People’s Trade Value Column.

This basically entailed figuring out who I would trade Andrew Bogut for straight up, taking age, health, salary and contract length into consideration.  Brandon Jennings has, as most Bucks fans realize, fallen out of consideration for this Top 50 list and the Bucks don’t have anybody else quite worthy of consideration unless it’s the Mbah a Moute-Ilysaova monster at power forward.  I decided to make a note on Ilyasova and leave it at that.

Would I trade Bogut for Kevin Garnett?  Maybe, but then I looked at KG’s contract and dismissed the idea.  I wouldn’t trade Bogut for Chris Bosh unless Bogut couldn’t walk, but then Bosh’s contract moves Bogut ahead of Bosh, too, on the list.  It all seemed fairly sensible until I read Simmons Trade Value Column this morning.

Simmons, in a podcast preview, had Bogut at about 30th, ranked with KG and Bosh, guys whose contracts are a lot more onerous the Bogues’, so I had in mind that I would probably move him up a few spots.   But in Simmons’ published version, he dumped AB all the way down to #40, at the head of a group that included Nene, Luis Scola, Danny Granger, Paul Millsap and Kevin Martin.  And Simmons failed to mention that Bogut is playing with one arm this season.  For reasons known only to someone who lives in L.A., Simmons then irrationally ranked notoriously injured Lakers center Andrew Bynum ahead of them all, despite his more-expensive-than-them-all contract.

Without further ado, here was my response:

Brandon Jennings is Simmons’ “toughest omission.”  The part of that I would argue with is this “toughest” thing.  Brandon’s a great kid who’s so quick he makes John Wall look like Chauncey Billups, and Isaiah Thomas raves about him in the March issue of GQ as one of the NBA’s top “five under 25” — but BJ has some growing to do.  He may never shoot consistently well enough to be a winning NBA point guard, and the Bucks should be open to offers for him.  Ouch, the Sports Guy is right — it is tough to come to that conclusion.

Ersan Ilyasova would be a much tougher omission if anybody at ESPN could remember his name. The Bucks starting power forward’s star will rise as fast as the Bucks allow it to, which is to say that the team has not allowed Ilyasova’s star to rise even as they’ve discovered that he’s making every five-man rotation he’s a part of play winning ball (+/-).  The hope here is that the Bucks will set his value (he’s currently a steal at $2.5 million per year, next season unguaranteed) without interference from the rest of the league. We may not get there, but he deserves consideration as a “cost effective building block.”  (Let’s call this a “watch list” note). 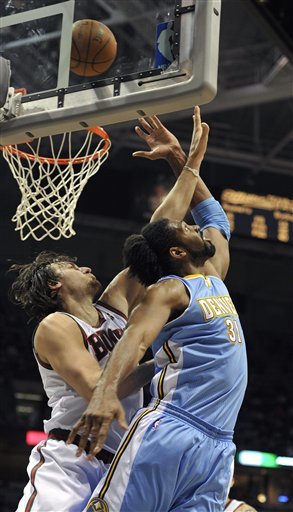 22. Andrew Bogut. When your center dominates the second half of a nationally televised NBA without taking a shot, there are two logical reactions.  The first is to wonder why the biggest man on the court isn’t getting more touches in the offense, and what could possibly be wrong with either the biggest man on the court or his teammates.  The second is to start counting blocked shots and rebounds and, oh there’s the charge he just took, and to look at the beleaguered faces of the guys on the other team fighting in the paint with your center, possession after weary possession. A third (and completely obligatory) reaction is to look up at the scoreboard, where you see that your team is ahead by 5 midway through the 4th quarter against the rugged sea of tattoos that are the Denver Nuggets.

The Bucks managed to lose the game down the stretch, but then, your center isn’t the player who threw the ball away in transition after he killed another Nuggets possession with a blocked shot.  Your center didn’t shoot 1-for-18 from the 3-point line or put himself in a position where the coach has to play him 44 minutes to give your team a shot at winning the game.  All Andrew Bogut did against Denver was grab 20 rebounds, block five shots, alter countless others, take a charge and control the defensive paint while wearing the Nuggets down and putting his team in position to win the game.

Bogut does this night in and night out. He’s 5th in the league in rebounding (11.5 per game) and leads the league in Defensive Plays (blocks, steals, charges taken) clocking in at just over 4 per game.

People, all this is difficult to trade and well worth the $13 million per year that the Bucks are paying Bogut through 2014.  That’s full time, borderline All-Star/All-NBA center pay in the NBA, and it’s less of a commitment than the Bulls have made to Joakim Noah, who’s under contract through 2016. Noah’s health has been worse than Bogut’s, believe it or not, and he’s been routinely outplayed by Bogut on the occasions that they’ve gone head-to-head.  Wherever one stands in the Bogut-Noah debate, edge to Bogut based on more reasonable length of contract.

Would you rather have Josh Smith’s shorter contract (2013, $25.8 million) and a hole in the pivot?  No.  And Bogut’s DPOY play at center gives him an edge over the other guards and forwards ranked behind him in the “borderline franchise player” group.

Want more efficient offense out of Bogut?  Trade for Al Horford or Amar’e Stoudemire, the big men ranked just ahead of Bogut.  But note that AB is clearly out of the can’t-win-with-Chris-Kaman-woods and is one of the better passing big men in the game.  And did we mention that his right arm, mangled in a horrific fall last March, is still on the mend?

Bogut’s scoring 13 points per game in the NBA with one arm, but we’re the Milwaukee Bucks, so, no — we’re not infuriated that you asked us about his availability.

So there you have it.  My thinking was to simply organize Simmons list and move Bogut up into a group of “Borderline Franchise” players that are (or will be in Joakim Noah’s case) working under $12 million per year contracts and all happen to play in frontcourt.  It’s a natural grouping that Simmons mixed up by putting in … the Warriors starting backcourt and Eric Gordon?   The result looks like this:

No, that’s not an acknowledgement that Horford, or Stoudemire for that matter, are centers (Horford’s not; Amar’e plays more center for the Knicks than Horford does in Atlanta) but more of a nod to the fact that Horford’s right hand works better than Bogut or Noah’s.

Stoudemire begins Simmons’ first “Franchise” group, and rightly so, though I’m pretty sure he and D’Antoni will never deliver a championship.