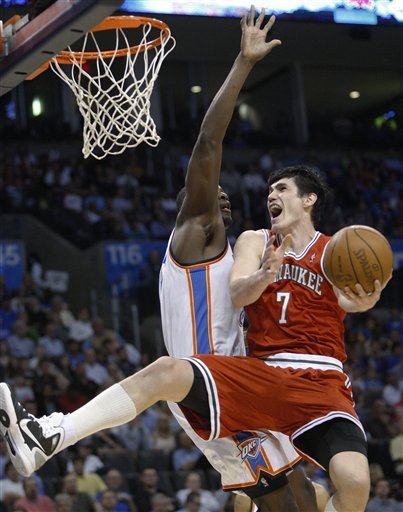 Chances are that not too many Wisconsin sports fans were watching the FIBA World Basketball championships the weekend of Sept. 12, when the Badgers hosted San Jose State and the Packers opening their regular season in Philly.

If they had, more of the state’s sports nuts might be questioning Bucks GM John Hammond’s sanity.

After leading his Turkish National team in scoring (14 pts./game) and rebounding (7.5  rpg) during Turkey’s run to a silver medal, Ersan Ilyasova was in summer 2010 a star rising faster than any other international player.

Yet before the FIBA tournament even began, Ilyasova’s GM in Milwaukee had given away a big chunk of the 23-year-old forward’s job and playing time.

Ilyasova returned to the Bucks to find himself all but benched by coach Scott Skiles, watching $32 million free agent acquisition Drew Gooden play the bulk of the Bucks’ power forward minutes.  He was also watching Gooden flounder and the Bucks lose twice as much as they won to start the season.

Much has been made of the 270-plus games that injured Bucks missed, but the truth was that there was never playing time for the five Bucks forwards — Ilyasova, Gooden, Luc Mbah a Moute, Carlos Delfino and Corey Maggette — seven if you include Chris Douglas-Roberts and rookie Larry Sanders.

When the injuries to Douglas-Roberts, Delfino and Gooden occurred, the healthy players had some idea what their roles and playing time was going to be.  No injuries = limited PT and a management problem for Skiles.

Early on, the best solution Skiles could come up with was to bench Ilyasova, justifying it with talk about the minutia of Ilyasova’s textbook shooting form.  Ilyasova acknowledged that he was fatigued after a long summer with his Turkish team.

But there was always a “what came first?” question about Ersan’s poor shooting and lack of playing time.   Was he struggling with shooting rhythm because of a lack of PT, or was he really, as Skiles suggested, too off his game to deserve the PT?   Whatever the case, there’s no question that Skiles was yanking Ilyasova if he missed his first few shots and that, as a result, Ersan was pressing.  That high-arcing jumper wasn’t falling.  And the Bucks were losing.

Ilyasova started the season 1-for-5 against New Orleans and 0-for-4 in an 8-minute stint in Minnesota.  In game three, the Bucks home opener, Ilyasova played all of 58 seconds and didn’t shoot.

What was wrong with Ilyasova? Absolutely nothing, those who watched the World Championships could attest.  Excuses aside, Skiles was simply opting to play Gooden, the GM’s free agent investment.  The Bucks, also working newcomers Corey Maggette and Keyon Dooling into the rotation, looked lost on defense, confused on offense and worse — they looked like a bad team with a bad coach.

The fifth game of the season, in Boston, still stands emblematic of the Bucks frustrating season.  Against a respected opponent, the 2010 Bucks showed up and outplayed the Celtics until the game’s final minutes when the C’s were able to force overtime.  Gooden was benched after two quick fouls in the first quarter, Andrew Bogut got 20 looks and 21 points, and Ilyasova played 35 minutes, scoring 15 points, grabbing seven rebounds and battling Kevin Garnett to a sub-KG game.  But in what would become an all-too-familiar story, the Bucks couldn’t close the game and lost in a parade of Paul Pierce free throws in overtime.

The following game in Indiana — with Bogut out — Ilyasova played 27 minutes, including some at center guading Roy Hibbert, and was a defensive wrecking crew (2 steals, 2 charges taken) while scoring an efficient nine points on eight looks, hitting two threes.  The Bucks won, offering every indication that nothing short of disaster could land the Bucks behind the Pacers in the standings.

Problem solved, right?  Nope.  Skiles went right back to limiting Ilyasova’s minutes against David West and the Hornets, another loss,and the Bucks were 2-and-5.  Skiles had yanked Ilyasova in five games, four of them Bucks losses.  This would continue through game 14, a loss to the lowly Cavs in Cleveland.  In Philadelphia, Ilyasova snared six rebounds in eight minutes yet found himself benched and watching the Bucks lose by 11.

After 14 games the Bucks record was a pitiful 5-9, despite leading the league in defense.  Ilyasova wasn’t the only Buck struggling to put the ball in the basket, yet he was apparently the only Buck who had lost the trust of his coach over it. Clearly, Skiles’ handling of the situation wasn’t helping the shooter.  Something had to give.  In the end, it was Gooden’s left foot and plantar fasciitis condition that would force him to miss 47 games.

But the ten “Ersan-i-yank” games had done their damage.  The Bucks and Ilyasova’s seasons, obviously, would have looked quite a bit different without them.

That’s better overall shooting in those 50 games — all but four from Nov. 26 on — than he shot last season, though with a slightly lower 3-point shooting mark.

Remove the 32 percent 3-point shooting from those 50 games, and a 49.6 inside-the-arc shooting percentage is revealed — remarkable for a player who shoots most comfortably 17-21 feet from the basket and has a limited post-up game.  To compare, Bogut in a good year makes just one shot more per 30 shooting almost entirely within ten feet of the rim.

Crunching the shooting stats at 82games.com, Ilyasova on the season made 50.2 percent (125 of 249) of his jump shots inside the 3-point line, a Dirk Nowitzki-like percentage.  In close and into the defense was an adventure (just 43.8 percent) where Ersan’s “finishing” and shot selection could stand to improve.  But the midrange Ilyasova jumper was arguably the most reliable routine offense the 2011 Bucks had.

Taking into account Ersan’s 89.4 percent free throw shooting, the best marksmanship of any NBA forward (0.2 percent better in 2011 than Nowitzki), he emerges as the Bucks best “pure” shooter.  “One of the best in the world for a four,” says Andrew Bogut.  And arguably the best shooter on a 43 percent shooting team.

This was evident in late January when Ilyasova went on a tear to help lift the Bucks to wins against Toronto and New Jersey.  It carried over to a three-game road trip west which fell apart when Bogut was injured against the L.A. Clippers.  Such were the frustrations of the Bucks season.

“There’s no question Ersan has to be more consistent with his shot,” said Skiles at the end of the season.

Coach, you didn’t notice — he already has (no further micro-management required).

Ilyasova’s still only 23 years old (he turns 24 next month) and has potential to become one of the best long range shooters in the NBA.  For now, he’s the best jump-shooter from 22-feet-in that the poor-shooting Bucks have on their roster.

Pure shooter, solid, scrappy, disruptive position defender with a top 20 NBA defensive rating … That’s the kind of player who wins games if he’s on the court.

Ilyasova will be as bright a star as the Milwaukee Bucks want him to be. If they clear the path of capable, but limited guys like Luc Richard Mbah-Moute, Carlos Delfino and Corey Maggette – and empower Ilyasova to look for his shot on the same level as Michael Redd, John Salmons and Andrew Bogut – the Bucks have a budding superstar on their hands.  — Denver Post writer Chris Dempsey, naming Ilyasova “the most fascinating player of the 2010 FIBA World Championships.”

Add Gooden to Dempsey’s list and note that, after another season in Milwaukee, Skiles and GM Hammond seem no closer to clearing a path for Ilyasova than they did last summer when they signed Gooden.  In all likelihood, this path now leads out of Milwaukee.

Three-point shooting at home: Just because the NBA painted a 3-point line on the court, does not mean that an outside shooter has to set up behind it.  For Ilyasova, the particular line to ignore is the one painted on the hardwood at the Bradley Center.

On the road he shot 39.8 percent, good enough to lead the Bucks.

One can’t necessarily blame ticket-buying Bucks fans if they fail to appreciate Ilyasova the shooter, no matter how well he shot everywhere else.  The shots fell more often on the road last season than at home, too, though the difference was not as pronounced.  If it’s a Bradley Center trend, it dug in this season and grew worse.

Indeed, a change of venue may be what’s best for Ilyasova.  Unfortunately, it’s probably not the best thing for the Bucks.

**** Next up: I’ll continue to look at the Bucks power forwards, focusing on defense (Mbah a Moute’s forte) and rebounding (Gooden’s forte) … and Ilyasova, who played the most PF for the Bucks in 2011 and was the power forward on four of the Bucks five most successful rotations.