Happy New Year!   And welcome to 2012 on behalf of the editorial board at The Bob Boozer Jinx, most of whom are still sleeping off last night’s hilarity, events made possible by the board’s decision to handcuff me to the steering wheel of an alcohol-detecting cab and make me drive them around all night.  They’re not responsible for any of the gunfire you might have heard at midnight.

The Bucks had this weekend to themselves, getting ready for a five-games-in-seven-days trip west, which begins Monday night with the familiar Mountain-Time, Denver-Utah back-to-back and takes them to Sacramento and L.A. (Clippers) before wrapping up in Phoenix next Sunday.  It probably doesn’t need to be said that, in this lockout-shortened season, the Bucks (2-1) need to gut out at least two wins on this rough road and come home no worse than 4-4.

There’s no time like the outset of this trip to check the NBA leader board and see where our Bucks landed after Week One.  The good news is that the Bucks are again among the league leaders in defense, led by Andrew Bogut; and that they’re rankings on the offensive end aren’t half bad.  (NBA LEADER BOARD and SUMMARY).

Consider this an early touch-point blog of sorts.  I’ll check back to measure progress (or lack thereof) after the trip. (Find the season summary here – scroll down for the “Miscellaneous Stats” where you’ll find offense and defense ratings, turnover percentages and other pace-adjusted stats).

The Bucks rank 4th in forcing turnovers, getting one 16.7% of the time, which means the Bobcats, T-wolves and Wizards turned it over once every six possessions.  That’s remarkably sloppy opponent offense, but also a key element to the Skiles constant pressure, in-your-grill, man-to-man defense.  It’s designed to force mistakes, not necessarily steals.

The Bucks defensive rebounding rate is in the toilet (22nd in NBA), as the Bucks are controlling just 71.4% of available opponent misses.  We can thank the T-Wolves and Bobcats for that.  Just a bad start for a strong rebounding team or a sign of things to come?  When in doubt blame Kevin Love.

TEAM OFFENSE:  The Bucks rank 16th in offense, tied with the Raptors, scoring 103.2 points per 100 possessions.  Not half bad and a major improvement over last season when they were dead last.

INDIVIDUALS:  Five Bucks are on the NBA Top 20 lists, four of them for good stuff.   The “bad” is Stephen Jackson, who ranks 16th in fouls.  The four “good” are Andrew Bogut (no surprise there), Brandon Jennings (a bit of a surprise), Ersan Ilyasova (no surprise here at the Jinx) and Carlos Delfino (Del-3-no!).  Lets begin with Bogut.

ANDREW BOGUT:  The Pacers may be leading the league in team defense but the best defensive teams on the planet continue to be the Orlando Magic when Dwight Howard is on the court and the Bucks when Andrew Bogut is in the game.  Howard (84.8 estimated pts per 100 allowed) and Bogut (89.0) rank No. 1 and No. 2 in defensive rating, right where they’ve been since 2009.

Rebounding: Bogut is hauling in 11.0 rebounds per game but not on the leader board because the Bucks have played only three games.  He’s 13th in defensive rebound rate (26% of available rebounds grabbed) and 18th in overall rebounding rate.*   Expect Bogut to stake his claim to the Top 10 in these areas on this road trip.   Bogues is 18th in total rebounds, 13th in defensive rebounds.

Blocked shots:  Bogut, the NBA’s leading per game shot-blocker in 2011 has yet to make an appearance on the blocked shot leader board.  His typical blocked shot rate since 2009 has been about 6.0% — it’s half that after Week One.

BRANDON JENNINGS:  The 7th leading scorer in the NBA at 22.7 per game, and doing it fairly efficiently.  My computer froze when I wrote that the first time.  BJ is shooting 46% from the floor and getting to the line in the 4th quarter when the Bucks need him to the most.

ERSAN ILYASOVA:   Tenacious D is his calling card.  Ilyasova ranks 5th in Defensive Rating, leading the Bucks forwards in minutes played (27 per game) and helping Bogut lead the Bucks to their No. 2 D-rating.

CARLOS DELFINO:  Three out of five from Downtown in one game gets Carlos in the 3-point shooting top 10.   Carlos ranks 10th at 60%.

STEPHEN JACKSON:  Fouls, turnovers, wild shots — Jackson’s the wild card for the Bucks, no doubt about that, but he’s also out of shape.  He’s “that guy,” and he even looks like he’s acquired my beer gut.  Jackson’s turning it over three times a game (if not more with wild shots) and would be in the Top 20 there had the Bucks played more than three games.  He’s 16th in total fouls (with 14) and one of the few guys in that bottom 20 who’s played three games.   Here’s hoping Captain Jack finds a groove on the road.

Ray Allen:  A true shooting percentage of 79.9 percent going into Sunday’s game against the Wiz.  Let’s call it 80.   True shooting counts two free throw attempts as one shot, carves up that shot based on percentage of FT makes, and adds the extra point for made 3-pointers to “truly” account for a shooter’s scoring accuracy.  Ray’s 58% from the field, 58% from downtown (14 of 24) and, no, he hasn’t missed a free throw in 16 tries.*

The Celtics may have started 1-3 without Paul Pierce but Ray is on fire and hasn’t taken a bad shot that I’ve seen.  Ray was 11th in Week One scoring with 20.0 per game.

*Ray on Sunday missed his first free throw of the season, always a solemn occasion.

Greg Stiemsma:  The 4-year Wisconsin Badger from tiny Randolph, WI, somewhere up there between Portage and Fon du Lac, made his NBA debut this week with the Celtics, backing up Jermaine O’Neal. Stiemsma blocked seven shots in two games, good enough for No. 2 in the league behind Blake Griffith‘s Clippers running mate DeAndre Jordan (4.7 blocks per game) and ahead of Howard (3.0 blocks).

Dwight Howard:  What trade talk?  Howard hauled in a Superman-like 70 rebounds in four games for the Magic to lead all boardsmen, including a league-leading 52 defensive boards.  Howard entered week two of his season averaging 17.5 boards a game and has cleaned off an astounding 38% of all opponent missed shots.

DeMarcus Cousins of the Sacramento Kings was leading offensive rebounders with 23 in four games, then demanded to be traded after the Kings were blown out by the Knicks.   That’s 5.75 boards on the offensive glass per game for Cousins.  Somebody block big man out.  Somebody trade him.  Somebody tell him to stay home.  Somebody send him a Drew Gooden headband.

Kevin Love:  Three games, 44 rebounds, 20 against the Bucks.  Love is grabbing 14.7 boards a game, six per on the offensive glass and trails only Howard.  How does he do it?   Maybe hit the glass more, Darko!

Carmelo Anthony:  Forty free throws in four games.  40!  I’ve seen some of those games, and the fouls weren’t of the ticky-tack variety.  Carmelo’s averaging 25.0 per game and is sixth in scoring, a full 2.3 pts ahead of 7th place Jennings. (Note to BJ: Don’t bother trying to keep up with him.)

Lebron James:  Leads the league in scoring (33.0 per game) but the Heat don’t look so invincible.  The Bobcats had ’em in Charlotte but let ’em off the hook with turnovers and missed free throws down the stretch.  They still don’t have a center and are reportedly after ex-Buck-Blazer-Bobcat Joel Przybilla.

The Bulls:   They’re putting the hurt on the Randolph-Gasol Memphis Grizzlies in Chicago tonight, and will probably have the league’s top-rated defense come morning.*  The Grizzlies had all of 28 points at half and finished on the wrong end of a 104-64 score.   The defensive standard has been set in the Eastern Conference.*

The Hawks, Bulls, Sixers, Magic and Celtics ran Top 10 offense in Week One, something to keep in mind when thinking of contenders for East playoff spots.  Surprised the Knicks weren’t in the Top 10?  Me too. 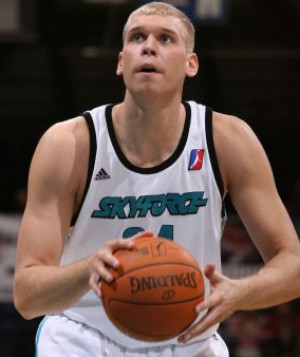