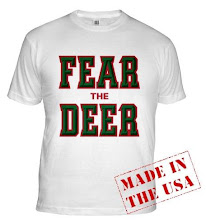 It’s hard to hold your head up when “Fear” is in your new slogan and your team fails to show up, as the Bucks failed to do in Game 2.   But with a dominating 107-89 Game 3 victory behind the deer, Bucks fans can once again say it with pride.

I can appreciate that John Salmons (22 pts on 11 shots) will not shoot 9-11 from the field in Game 4 tonight. But that’s not the sort of thing I focus on when I’m analyzing games, nor was the Bucks shooting ever a reason to “Fear the Deer.”  (The soft on D, good-to-even-“great” shooters were traded out of Milwaukee in GM John Hammond* and coach Scott Skiles’ first summer on the job.)

The main reason the Hawks should “Fear the Deer” (other than the nagging internal Hawk concerns about team mental stability) is the Bucks ever-evolving strategy(s) for managing the Hawks young frontline. Looking to Game 4 tonight (7:30 p.m.) and beyond, the prospects of the Bucks big men getting stonger and more confident against Josh Smith and Al Horford seem pretty good. It may even be safe to buy a “Fear the Deer” t-shirt or two for the summer.*

“Fear the Deer,”  Josh Smith and Al Horford.  The Bucks are serious about controlling the paint in this series, and they seem capable of doing it without Andrew Bogut.  Neither Horford or Smith got more than a bucket or two in post-up Saturday, which isn’t really that surprising. While the Hawks duo did some early damage in Game 1 in post-up (off Joe Johnson feeds), most of their scoring has been on lob plays (Smith); layups and dunks off turnovers. They haven’t been killing the Bucks in contested post situations.

The unchallenged shots were the problem (and a Skiles focused prior to Game 3) so it was a matter of the Bucks big men locking in against Smith and Horford. Bucks defender-at-large Luc Mbah a Moute started the game on Smith for the first time in the series.

Horford scored 10 pts on 5-9 shooting Saturday and was limited to just 3 boards in 31 mins. Hawks 6th man Jamal Crawford, a guard, had more defensive boards than Horford did in Game 3. And those rebounds were just about the only things that Crawford did right or well all game.

Thomas (13 rebs) and Gadzuric (10 rebs in 17 mins) hauled down 23 boards combined in just under 43 mins.  They kept their man, Horford, off the glass, and had him locked down most of the game.

Note on Gadzuric:  Much maligned and overpaid Gadz has scarcely played all year, and the Hawks have probably made a critical mistake in allowing him to get some confidence andgame going (for the first time all season). Atlanta is a team prone to mental lapses, and going to sleep on Gadz was a big one that could have some carry-over.  Game 4, keep an eye on Gadz.

Smith vs. Mbah a Moute:  The Bucks defensive stopper was deployed on Smith exclusively in the first half Saturday and Josh got no easy looks — despite crashing the offensive glass to the tune of NINE offensive boards for the game.  Smith had 12 rebs and 7 pts but was 2-12 from the floor (3-6 from the line). It was a good reminder of how limited Smith’s offensive game can be — if there’s a defender on hand good enough to challenge his shots.

Luc Mbah a Moute:  He brings a Dennis Rodman-like swagger to  defensive play, almost an arrogance; Luc’s success this series on Hawks All-Star Joe Johnson is chronicled here. Smith won’t beat Luc often in the half court. The damage the Hawks’ mercurial star inflicts is usually junk — easy stuff off turnovers and rebounds and lobs from Johnson. Mbah a Moute, despite his ever growing reputation as one of the league’s great defenders, has to do a better job of keeping track of Smith (the offensive glass) …  should Skiles continue to deploy him on the Smith assignment.

Taking it right at Smith: Mbah a Moute, a long-armed 6’8″, is taller than the 6’7″ Smith.  He’s just as quick, if not quicker, though he doesn’t jump out of the building quite like Josh (who does?).  Mbah a Moute scored 12 pts in Game 3 on 5-7 shooting – all of it in close.  He took it right to the rim against Smith and Marvin Williams, and was long enough and quick enough to avoid Smith’s flying blocks. Incidentally, Luc had a layup taken off the scoreboard when Smith was floored as Luc ran him into a Thomas pick in the lane. Smith stayed down for a moment to catch his breath and came up limping. The play seemed to symbolize how the day was going (and went) for the Hawks.

Note: Smith was runner-up to Dwight Howard in the Defensive Player of the Year balloting, which was a surprise. (I thought the Celtics Rajon Rondo, the NBA steals leader, was a shoe-in for #2, considering that he spearheads the Celtics Top 5-rated defense.)  Smith was the only player in the NBA with more than 100 steals (130) and 100 blocks (173).  Statistically, the Hawks D is at least an estimated 5-7 points stingier when he’s in the game, quite a lot when you think about it.  But it also highlights how poor some of the other Hawks are on D (guards Bibby and Crawford in particular). Andrew Bogut was 7th in the DPOY vote.

Enter Ersan: Ersan Ilyasova has been a scoring and rebounding machine off the Bucks bench. John Hollinger would be salivating over his production.  Check out Ilyasova’s line:

11.7 pts, 8.7 rebs … in 23. 3 mins! …   Ersan’s offensive rebounding percentage through 3 games is 19.1, a playoffs-leading mark. His overall rebounding rate (% of available rebounds) is right behind playoff leader Joakim Noah’s.   The Bucks 6’9″ forward has a knack for being exactly where opponents least want him to be, taking charges, tipping rebounds, cleaning up loose plays under the hoop.

Ilyasova has been in a shooting groove this series (over 60%, effectively), and is a bonafide matchup problem for the Hawks.  Smith, naturally, is the Hawks best defender to check Ersan but Smith can’t guard everybody on the floor, nor is he on the court for 48 mins (same problem for the Bucks and Mbah a Moute).  So far, Skiles has maximized his power forward almost perfectly off the bench, and while expanding his minutes would help defensively, it could diffuse Ilyasova as an offensive weapon. A couple of few more minutes than the 21-24 we’ve seen, though, probably wouldn’t hurt.

Zaza Pachulia:  Horford’s backup is a savvy big man who sometimes is more effective than Horford (though less and less so). The Bucks would be wise not to overlook him.   Zaza was 6 of 7 in the post Saturday, and had a lot to do with the Hawks reeling in the score during garbage time.

Stackhouse and Delfino: They were a combined 5 of 20 from the field Saturday and turned it over SIX TIMES.  True, Del hit two key shots from Downtown to squelch the Hawks 3rd quarter run to cut into the Bucks lead. Those were Hawks demoralizers considering that he hadn’t made one from out there in the first ten quarters of the series. Maybe those shots will snap him out of this slump hes been in, but so far Del has been a negative impact offensive player in this series.  …. The Bucks got away with some sloppy play on Saturday, and some better, efficient play from Stack and Del would probably have the Hawks fighting an uphill battle in Game 4.

Notes from Atlanta:  Found this on Peachtree Hoops, a site “for Atlanta Hawks fans.”

“The Hawks have averaged a margin of defeat of over (20) points per road playoff loss over the last three seasons. That’s no aberration, folks—that’s a full blown habit.”

Firing Mike Woodson?   The last time that Mike Woodson coached a playoff game as close as Bucks-Hawks Game 1 was May 2, 2008 against the Celtics in Atlanta.  …  (No, that wasn’t the “Dammit RAY” game 4 (April 28 – when Joe Johnson scored 25).  All three Celtics-Hawks games in Atlanta were pretty close. The four games in Boston were blowouts.)   How tough can the Hawks be away from home?  The evidence and history suggests that they’re mentally impaired and unfocused away from their “highlight dome” in Atlanta.

NOT SO BOLD PREDICTION:  I wasn’t surprised by Saturday’s blowout — in fact I expected it at some point during this series. I was more surprised by Skiles’ inability to recognize his team after the Bucks’ lackluster Game 2 play.   Game 4 will be a battle for the interior, with Mbah a Moute’s defense continuing to be a major theme, as well as Skiles’ dedication to his bigger rotations.  After three games in the negative, the Bucks should be able to count on some positive production from Delfino.  The Bucks will hold their own in the paint and win the 50-50 hustle plays late to even up the series 2-2 heading back to Atlanta for Game 5.

*Bucks GM John Hammond won NBA executive of 2009-10, a vote held among the executives.  This happened a couple of days ago, so a belated comment should be short.  A lot of what ends up happening on this site is that I try to write behind commonly held perceptions about the Bucks or the NBA in general, basketball, too.  One of my least favorite perceptions is that Jerry Stackhouse and John Salmons saved the day and made this Bucks team what it has become. They didn’t, obviously, and the contributions of Stackhouse, in particular, have been overstated by both the Bucks and media in Milwaukee. The additions probably won the award for Hammond, and continue to reside in the realm of “the Bucks lost Michael Redd and …”  Let’s not forget that a lot of what Hammond has done to date has been hit or miss, and that the Bucks are simply a better team with Redd out of the picture.  The GM is a subject whose scrutiny is more properly drawn after the playoffs.

* The “Fear the Deer” t-shirts are the design of Bucks fan Dan Warfield, who wanted one but couldn’t find a place online to buy — so he made his own. The shirts are available through the DIY site, Cafe Press, which offers some nice organic/”green” shirt options.  (And, no, I don’t have any financial interest in the sale of t-shirts — I just think it’d be pretty cool to see Bucks fans representing this summer and into next season.  Fear the Deer!!!