“… It just feels like failure,” said John Salmons this week as the Bucks prepared for the final game of a season that has, in no uncertain terms, been a failure.  For Salmons, in particular, the 2010-11 has been a long struggle to find a shooting groove and consistency within Scott Skiles’ perimeter oriented pick-and-roll offense.

Salmons, like many Bucks, played through injuries, and, though he played 73 games before it was said and done, the Fish was only healthy for half of those, and fewer still with a healthy Brandon Jennings in the backcourt.

But injuries are no excuse.  It’s almost unthinkable that this Bucks team is looking up in the standings at the 37-win Indiana Pacers, the only team in the 2011 playoffs to have fired a coach mid-season.  (One of these things is not like the others and the Pacers are it.)

A cold 4th quarter shooting here, a bad bench run there, dead-end finishes in Philly Jan. 14 and in Charlotte March 28, a defeat at the buzzer in Cleveland in November, a 6-and-10 record in their own weak division and the Bucks earned the shame of seeing the Pacers play the Bulls in the playoffs, Round One.

Weren’t the Bucks expected to be the Bulls rivals this season?

Indeed they were, and to a certain extent they still are:  Centers Andrew Bogut and Joakim Noah, the heart and soul of whatever the current Bucks-Bulls have become, aren’t going anywhere.  Brandon Jennings vs. Derrick Rose?   We’ll get back to you on that.   Scott Skiles, the coach who ran the Baby Bulls in Chicago (2003-2007) will be here for next season, according to Bucks GM John Hammond.

But for now, the failure to grab the low-hanging 8th seed in the East, thereby setting up the first Bucks-Bulls playoff series since 1990, is a painful blow to an NBA franchise in a city that seems to care less and less about its pro basketball team.  The Bucks this season needed to give its fans something, anything — and, no, a farewell to Michael Redd doesn’t qualify as “anything.”

Whatever the outcome, a Bucks-Bulls playoff would have been a nice consolation prize in the Bucks battle for NBA relevance.  No, it would not have made this season’s Bucks relevant — but a series against the Bucks’ natural rivals down I-94, boasting the certain league MVP, Rose, would have at least helped keep Milwaukee on the NBA map, a place where they’ve not often been since that Bucks-Bulls playoff series 21 years ago.

By the 1989-90 campaign, the Bucks had traded Terry Cummings for Alvin Robertson and Sidney Moncrief was an Atlanta Hawk. The Ricky Pierce-led Bucks were a mere shadow of the Central Division leading Don Nelson teams.  Michael Jordan’s Bulls, in Jordan’s fifth season, had become contenders, though the Bad Boy Pistons in Detroit ruled the East as Larry Bird’s career waned.  Patrick Ewing patrolled the paint in New York.

The Bulls won the first round series 3-1, cementing the Del Harris era Bucks teams as playoffs also rans — same as it’s ever been in Bucks-Bulls history.  When one franchise is up, the other is down, more often than not due, in part, to the success of the other.  This was the story this year as the Bulls not only swept the Bucks 4-0 in the season series but dropped a key late season game to the Pacers in Indiana that helped the Pacers take the inside track in the race for eighth. … Same as it ever was for the Bucks and Bulls.

If the rivalry was ever bitter, it was in the early-to-mid 1970s, when the Lew Alcindor/Kareem Abdul-Jabbar Bucks, realigned to the Western Conference and found Bob Love, Jerry Sloan, Chet Walker and Norm Van Lier waiting for them in the Midwest Division (Thurmond would come later, in 1974-75).

As rivalries go, however, it was awfully one-sided, the Bulls unwilling patsies and annual runner-ups to the Bucks’ division dominance.  They met once in the playoffs, a four game sweep by the Bucks in the 1974 Western Conference Finals. If there was bitterness, it was all Chicago’s.  (See notes on the 1974 series from Kevin below).

From then on, the rivalry continued on its see-saw way as the Bucks rebuilt after the Kareem trade and the Sidney and Marques dominated the Central Division of the early 1980s (the firing of Jerry Sloan as Bulls coach part of that history).

In the mid-1980’s, Sidney and Terry Cummings held back the Bulls in Jordan’s early years, the Bucks finally relenting to Moncrief’s bad knees and, of course, to Jordan.

Jordan’s teams dominated the Glenn Robinson-Ray Allen Bucks in the 1990’s, while the Big Three Bucks returned the favor after Jordan left in 1998.  The Redd era Bucks were Central Division doormats while Skiles built the Baby Bulls.  In 2008 both teams were terrible.  Since then, if the Bucks were struggling, the Bulls were on a roll; if Rose had a bad ankle, Andrew Bogut was leading the Bucks into the playoffs.

This season, more of the same.  MVP-in-waiting Derrick Rose and his Bulls rocketed to the top of the Eastern Conference while the Bucks were only as good as a one-armed Andrew Bogut and sophomore-slumping Brandon Jennings could make them.  Too often, that wasn’t very good.  The Bucks won 28, lost 37 in games Bogut played.  Yet they had their chances.

And same as it ever was, this rivalry with the Bulls that seems like such a natural for the Bucks, will have to wait another year.

Only this time, the looming NBA lockout may make the wait longer. 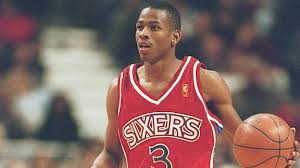 The Bucks just can’t shake the mojo that the Philadelphia 76ers have over them, and they fell victim to it once again Friday in a regrettable 90-79 loss to the (ouch) 2-10 Sixers in Philly.    Throw the team records out — Sixers have won three of the last five matchups and 6 0f 8 since Scott Skiles took over as coach.  Philly had won 7 straight before the Bucks seemingly broke the spell last January in what was likely Allen Iverson’s last game in the arena where he staged so many of his career highlights – the Bradley Center.

The Sixers have always been the Bucks nemesis, their greatest rival when times were good and Nellie’s Bucks in the early 1980’s were one of the best teams in the NBA — one of the best teams in history never to win a title, and certainly the best team in NBA history never to play in the Finals.  Forget 1991, the year the 48-win Del Harris Bucks were swept out of the playoffs by Charles Barkley’s Sixers —  there was something else amiss in Philly’s recent domination of the Bucks.  It can be traced back to Iverson’s first shot in the NBA, an airball that bounced harmlessly out of bounds on Nov. 1, 1996.

Was the spell broken last January?   Alas, no — “The Airball” is still exacting its revenge, and the Sixers showed Friday that they don’t need “The Answer,” Andre Iguodala or Sam Dalembert to stymie the Bucks — Thaddeus Young and Lou Williams will do just fine, shades of 2008 and 2009 when the Sixers were winning seven straight against the sluggish Michael Redd teams.  Interesting to note that Young and Williams are Mo Cheeks players, guys who, like their coach in his playing days, have always seemed to light up when they see a Milwaukee Bucks uniform.

The 5-8 Bucks. The silver lining for the Bucks these days could be the realization that, for the most part — until last weekend — they’ve been playing fairly well against a tough early season schedule and coming up painfully short in a few close games (two against the Hornets, OT in Boston and Saturday in a very winnable game against the Thunder, playing without Kevin Durant, the league’s leading scorer.  Add that one-point loss to either of the Hornets games as one the Bucks want back.

Yet it’s some consolation that their strength of schedule ranking is 12th in the league, better than everybody in the Central Division but the Bulls, with two Central games on the schedule this week in Cleveland and Detroit.  On some level, the Bucks have simply been an unlucky team that can’t catch a break.

The Bucks schedule for the first 35 games is tough, at no time tougher than next week when they head west for a Utah-Denver road swing, then come back home to play the Heat and the Magic.  No, it’s not much consolation, but the Bucks record should eventually turn around.  It will probably take a while … and they’ll have to do some good work on the road in the west in December to mitigate the depth of the hole they’ll likely be in come January.  Maybe they’ll even get lucky a time or two.