Twenty minutes into the 2nd half of Hawks-Bucks Game 1 Saturday, and the Hawks just couldn’t find a way to finish off Scott Skiles’ Bucks. The Hawks 22-point halftime lead had been cut down to seven, eight and Brandon Jennings was coming at them fast, leading chance after chance — 7 possessions in all — to pull the Bucks closer.

On the other end, Joe Johnson, the Hawks leading scorer, an All-Pro who had averaged 27.3 pts on 55% shooting in three regular season games against the Bucks, was clearly frustrated.  The Hawks offense had generated just 5 shots for Johnson in the half.  He made two of those 5 and generated a third bucket for himself on a rebound-miss-and-tip-in.  In 18 minutes of 2nd half court-time, Joe’s offense amounted to six hard fought points and two assists — to go with the misses and two 3rd quarter turnovers.  And the Bucks wouldn’t go away.

The reason for Joe Johnson’s frustration was Luc Mbah a Moute, Bucks defender-at-large; real honest-to-murgatroid prince in his native Cameroon, Africa; the man Kevin Durant named his toughest defender in the league (with Ron Artest).

Mbah a Moute, the Bucks starting power forward, lived in Johnson’s jersey in the 2nd half of Game 1.  At a full 6’8″, Mbah a Moute is taller, has longer arms and is quicker than Johnson.  No player that tall and that long with ability to harass a jumpshot is quicker in a defensive crouch, and that’s what Durant was talking about.

He denied Joe the ball, he crowded him on the perimeter, left hand ever-extended, fingers forming a web in the Hawks star’s face. He challenged what few jumpers Johnson attempted, he bodied his post back-downs, he cut off his drives. His long reach altered post entry passes, he forced turnovers, he hit the glass, he stole the ball.  Except for a 4:00 break while both players took a breather (end of the 3rd-beginning of the 4th) Johnson and Mbah a Moute were an inseparable fact of life for the Hawks stalled offense, and for Johnson the quality of that life was miserable.

It all came to a head with 3:30 to play as Johnson hit a jumper that seemed to announce an end to the 3 minutes of offensive futility (for both teams) and put the Hawks up by 12.  That should have provided the breathing room the Hawks needed. But after a Bucks miss, Jerry Stackhouse stole the ball from Hawks point guard Mike Bibby and drove for a layup.

On the next possession, Johnson, calling for the ball at the elbow, cut to Bibby as Bibby dribbled into the key. Mbah a Moute stepped in, tipped Bibby’s jump pass and ran it the other way, flipping it in as Johnson grabbed him by the shoulders and pulled him to the floor. No flagrant foul on Johnson, though it looked like there should have been one. The frustration had boiled over, and the Bucks had cut the Hawks lead back down to 8.

As Mbah a Moute stepped to the line to shoot the and-one, he smiled.

Johnson and the Hawks may have gone on to win the game, but Mbah a Moute was winning an important battle in the war. … He missed the free throw, though, and the Hawks took it and reran the set that Mbah a Moute had disrupted seconds earlier.  This time Johnson dribbled in isolation and, with the shot clock running down and Mbah a Moute all over him, forced up an awkward fallaway 20-footer from the top of the key.  It banked in.  H-O-R-S-E  if Johnson had called it. I don’t think he did. Game 1 to the Hawks. 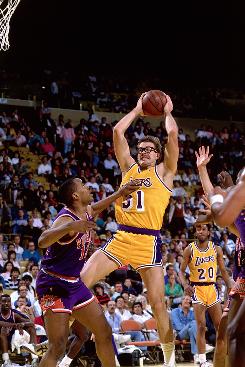 Joe’s thumb: At some point during his battle against Mbah a Moute, Johnson banged his thumb, aggravating an injury he suffered March 31 against the Lakers, in an entanglement with — guess who?  Durant’s other “toughest defender,” Ron Artest.

“It takes a little while for [the feeling] to come back,” Johnson said after the game. “Other than that, I’ve been good. I am just trying to pick my spots out there and get guys involved.”

Artest and Mbah a Moute’s names come up a lot when it comes to defense and dirty work.  They’re both 2010 All-Defensive honorable mention forwards on the Basketball Prospectus and NBA.Com media project teams.

ESPN columnist John Hollinger called Mbah a Moute the NBA’s “most underrated defensive player,” and put him on his All-NBA Defensive squad (3rd team). Not sure he’s underrated, though his playing time did drop below half-time in March and April.

As a rookie in 2009, Mbah a Moute was named Eastern Conference sixth man on USA Today’s first annual “All-Rambis Team,”  honoring grittiness and dirty work in the era of NBA millionaires — in the spirit of Laker’ big forward Kurt Rambis, of course. The Cavs’ Andy Varejao, the Rockets Shane Battier and Udonis Haslem of the Heat were some of the other notables on the team.

Kobe Bryant on Mbah a Moute: “You don’t see a lot of players who understand the value of playing hard defensively.”

Playing time:  The job Mbah a Moute did on Johnson wasn’t that surprising — Luc’s been assigned the NBA’s best since he came into league out of UCLA in 2008. The Bucks have been the toughest defense for D-Wade to score on since then. A Bucks-Nuggets game usually results in epic struggles between Mbah a Moute and Carmelo Anthony. Against the Celtics, “the prince” has guarded Ray Allen, Paul Pierce and Kevin Garnett — in a single game. He guards Lebron James.

What has been surprising is his lack of playing time against the Hawks and Johnson this season, despite being the logical cover for both Johnson and Josh Smith. Mbah a Moute was relegated to an avg. of 18.3 minutes vs. the Hawks, playing less vs. only the Jazz, Grizzlies, T-Wolves and Spurs.

All three Bucks-Hawks games were played after the trading deadline, when John Salmons became a Buck. Skiles often left the 6’6″ Salmons and Johnson to go head-to-head. Mbah a Moute spent more time on Smith than Johnson, much more on the Bucks bench. Skiles did call on Mbah a Moute to guard Johnson during the final minute of the Bucks 98-95 win in Milwaukee March 22.  Joe had been on fire (27 pts, 13-23) but was 0 for 2 to end the game.

During the season, starting small forward Carlos Delfino played well (15.3 pts) and a lot (39.3 mins) against the Hawks.  Jerry Stackhouse played an avg. of 24 mins (Skiles has obviously liked scorers on the floor against the Hawks’ weak perimeter defenders).  The playing time losers were Mbah a Moute and versatile big forward Ersan Ilyasova (21.3 mins) and the Bucks. They lost 2 of those 3 games.

The playoff trend is bound to be different for Mbah a Moute after 31 mins — 20 as Johnson’s shadow in the 2nd half. … But what about Delfino, Stackhouse and Ilyasova, who was expected to have a larger role in the absence of Andrew Bogut?

Stackhouse (27 mins) played more than Delfino (23) and Ilyasova (23) Saturday. The Bucks have now lost 3 of 4 to the Hawks.  Expect some changes here. Skiles can’t become so overly concerned about scoring that he’s leaving his better defenders on the bench. It’s not as though Delfino (11.0) and Ilyasova (10.4 in 23 mins, 15.9 per 36) haven’t averaged double figures in scoring for the Bucks this season.