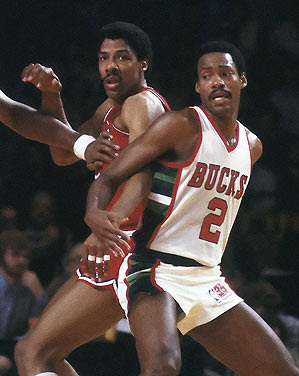 Springtime is on the way in Milwaukee.  The snows are melting a dirty trickle in the rain.  The chartered buses are revved up for the state high school sectionals.  March Madness is in the air.  And the Bucks playoff seeding rests (in part) on how well they fare in games against the Philadelphia 76ers and Boston Celtics.

To be a fan of coach Don Nelson’s Bucks was to worry about your team’s health every spring and fret over the strength of the opposition, the names Bird, Erving, Bobby Jones, McHale, Moses muttered under the breath in curses.  Bucks fans cringed at the inevitable playoff disappointment against arguably the two best teams ever assembled in the NBA.  But the Bucks in those days had Moncrief and Marques Johnson and Bob Lanier, and later Moncrief and Terry Cummings and Paul Pressey.  There was always hope.

The stakes aren’t so high for our Bucks these days.  They are a disappointing 25-38, a far cry from the Bucks teams that chased 60-win seasons during Moncrief’s prime.  Yet the 2011 Bucks find themselves gaining ground in the mad stumble for the 8th and final playoff spot in the East, one game out as they face the Sixers Saturday at the BC and go to Boston Sunday to meet the Celtics.

The Celtics are hanging on to the top seed in the East with Derrick Rose’s Bulls hot on their heels.  The Sixers are in 7th place, out of the Bucks reach and looking to move up a rung or two on the East playoff ladder.

This Philly-Boston weekend is critical for Bucks as they work to establish some late consistency and salvage the season.

“The big test for us is Philly (on Saturday),” Bucks center Andrew Bogut noted after the Bucks ran away from the last place Cleveland Cavs on Wednesday for a rare easy victory.  “We never play well against Philly, and they’re having a great year. I think Philly is our test.”

Eighth will have to do for Bogut and the Bucks this season.

And, no, the names Bogut, Garnett and Brand don’t resonate like those of Erving, Bird and Moncrief, who will be on hand Saturday providing color commentary for the Bucks’ FSN broadcast.

But spring is almost here in Wisconsin, and this will have to do.

Jordan’s 1986 Bulls, also featuring rookie Charles Oakley and Orlando Woolridge in his second season, are worth mentioning here because whoever grabs the 8th seed in the East this season will surely make the playoffs with one of the worst records in recent memory.

The worst NBA playoff record, post-ABA merger, belonged to the 1986 Bulls, who won just 30 games playing in arguably the toughest conference that the NBA had ever put on the nation’s courts — the Eastern Conference of the mid-1980’s.

How good was the 11-team East in 1986?  The young Bulls went 3-15 against the Celtics, Sixers and Bucks.  There were Dominique Wilkins‘ Hawks and Isaiah Thomas‘ Pistons to contend with, too, and the Bulls were just 3-9 against them.

The Western Conference champions, the Twin Towers Houston Rockets starring 7-footers Hakeem Olajawon and Ralph Sampson, would fall in six games to the Celtics in the 1986 NBA Finals.  The Rockets, with the luxury of playing in the West, finished 51-31 (#2 in the West behind the Lakers) but won just 3 of their 10 games against the Beasts of the East.  The Rockets would very likely have finished 6th in the East, and no better than 5th.

Playoff atmosphere in Philly. The Sixers kicked off the Boston-Philly-Milwaukee round-robin by holding off the Celtics, 89-86, snapping a seven-game home losing streak to the Celtics.  Center Spencer Hawes, forward Elton Brand and swingman Andre Iguodala led a balanced Sixer attack that ended with five players in double figures.   The Celtics were led by Jeff Green (18 pts) and Nenad Krstic (16 and 15 boards)?

No, these are not the Celtics and Sixers of the great Bird and Dr. J rivalry, but the Wachovia Center crowd roared playoff intensity nonetheless as Iguodala waltzed through the lane for the game-clinching layup.

Ray Allen had perhaps his worst game this season, scoring only 5 points on 2-11 shooting. The Celtics have lost two in a row.

The Sixers are playing their best ball since Allen Iverson’s heyday for coach Doug Collins, and moved to within a half game of the Knicks for 6th place and three games back of the Hawks in 5th.

The Hawks looked downright sick losing by 18 to the Carlos Boozer-less Bulls in Chicago.  “All-Star” Al Horford contributed 6 points and 7 rebounds in the loss.  Did I mention that the Bulls power forward, Carlos Boozer, didn’t play?

I watched Hawks-Bulls a second time, late night.  The Hawks simply turned dumb and selfish when faced with the in-your-face Bulls defense, just as they do when playing the Bucks.  They don’t like being challenged, and, even though Kirk Hinrich just joined the team, they looked completely lost when he wasn’t on the court.

They switched and had bigs guarding Derrick Rose in the 3rd quarter, same way the Mike Woodson Hawks of last season played Brandon Jennings.  That was a miserable failure.  Luol Deng got hot, and the Hawks had no one to guard him.  Josh Smith and Joe Johnson made horrible decisions on offense, repeatedly, Al Horford disappeared, and Jamaal Crawford and Kirk Hinrich seemed like the only guys interested in playing the game.

Zaza Pachulia was, as usual, a useless hack who isn’t too effective when a stronger player (Kurt Thomas) is matched up against him.

It was games 3, 4, and 5 last May all over again, with the Bulls dominating like the Bucks never could have without Bogut.   Bucks play the Hawks in Atlanta Tuesday, and that game looks very winnable.