“No one knows who he is, so he doesn’t get in the paper,” said TNT analyst Kenny Smith as Bucks guard Khris Middleton began his round last Saturday in Toronto at the Foot Locker NBA All-Star 3-point shootout.

“Who does he play for, Kenny?” wondered Charles Barkley, as though he didn’t already know.

“Milwaukee Bucks, baby,” Smith fired back, probably wondering why Barkley (and everyone else at the analyst table) had let Smith’s use of a great Yogi Berra quote go by without comment.

Yogi-ism noted, this exchange spoke volumes about the Bucks and where they find themselves three years after the end of the coach Scott Skiles era, that five-year plan to build a competitive, relevant team in ruin. Three years later and they are struggling in the standings, still working to grow a fan base, a reputation; to develop young players into something resembling NBA stars. To establish an identity. Charles Barkley may actually know that Middleton plays for the Bucks, but it isn’t locked in his mind as a sure thing.

Such is the Bucks roster story of the last few years — just when you think you know who they are, team management gets restless and begins making changes, and not necessarily the right changes (Corey Maggette, Drew Gooden, Keyon Dooling, Stephen Jackson; trading Andrew Bogut for Monte Ellis and Ekpe Udoh; passing on Klay Thompson and Kawhi Leonard to dump Maggette and trade down for Tobias Harris, later traded for J.J. Reddick …). Nobody knew who they were, so not only did the Bucks not get in the paper, coach Skiles refused to sign the contract extension he was offered in 2012 and was asked to leave.

A lot has happened since then, most of it very good, beginning with the pick of the 2013 draft, 18-year-old Giannis Antetokounmpo. New ownership came in, hired new management and coaching, accomplished the near-impossible by negotiating a new arena deal, and set out to establish a new identity for the Bucks.  Trading a point guard (Brandon Knight) who shot too much and had trouble running the pick-and-roll was part of this identity thing. The Bucks and coach Jason Kidd wanted a tall, young, pass-first point guard with good court vision and they got one last February at the trade deadline — Michael Carter-Williams. 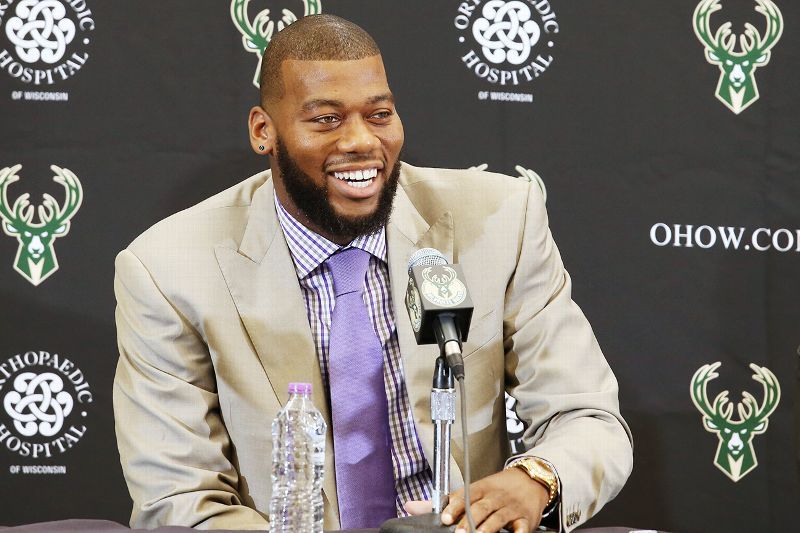 Greg Monroe and the Milwaukee Bucks were all smiles last summer when Monroe was signed, yet unfounded trade rumors persisted only a few months later.

Acquiring free agent center Greg “Moose” Monroe last summer was considered a great surprise catch at the time. Monroe was and is the kind of skilled big man who could give the Bucks reliable offense and presence inside, a borderline All-Star who, in the right setting could become a genuine NBA star. But while Monroe has played well (17 points, 10 rebs per game, team-leading 5.4 Win Shares at the All-Star break), the Bucks have been one of the worst defensive teams in the league and they’re currently out of playoff position. The obvious thing to do, of course, is to say “thanks for the excitement last summer and the five months of work, Moose” and trade him elsewhere. Right?

Monroe and Carter-Williams have allegedly been been on the trading block for a couple of months now, according to the rumor mill, and it’s been disappointing to see the speculation get as much play as it has.  Same old Bucks, some bloggers and reporters in Milwaukee and much of the NBA media seem to think — they’re losing, management is restless and they’ll entertain trade talk on everybody but Antetokounmpo, Middleton and 20-year-old forward Jabari Parker (Parker turns 21 on March 15).  The speculation died when real news reporting took over this week: It turned out that there was very little substance to the Monroe trade talk. Teams that inquired about his availability were rebuffed. The Carter-Williams talk is all but dead as the trade deadline approaches, and it has slowly dawned on most observers that there was no realistic trade available. All’s quiet with 15 minutes to go before the deadline.  Even the Miles Plumlee trade talk has died down.

The Bucks stood pat, win or lose, with their young, developing roster because it was the only sensible thing to do.  “There’re no change to be made. Continuity is something we’re trying for,” said coach Jason Kidd, also the guy most believe is calling the player personnel shots. Monroe and Carter-Williams need time. Parker, despite his obvious defensive and rebounding shortcomings and lack of court sense, needs time.

In the 1990s, Glenn Robinson, Ray Allen and Vin Baker were given a full season (1996-97) before it was decided that Baker (the Black Hole) was not a good fit. Carter-Williams has barely had that, Parker has not yet played a full season, and Monroe’s been a Buck for 54 games; the idea that the Bucks would trade him so soon after signing him was, from the start, ridiculous. This season was not the season for trades, and it’s a relief to write that as the deadline has passed and Carter-Williams, Monroe and Plumlee are still Milwaukee Bucks.  Plumlee had only recently begun to play well, filling in for injured John Henson, so it was good to see the Bucks decline on whatever offers were out there (the Wizards were reportedly interested).

Trade speculation around the deadline is an annual February ritual for NBA fans, complete with its own sense of non-reality. It’s not always a good thing, especially for a team struggling to establish an identity in the league. So far that identity is rooted in the sometimes brilliant play of Antetokounmpo and Middleton, when that happens, though both have been inconsistent this season. Inconsistency is the norm for most Bucks players (Monroe excepted) and this has been disappointing after making the playoffs last season. Middleton looks like an All-Star some nights. Michael Carter-Williams can be a shutdown defender, some nights. Antetokounmpo is nowhere to be found some nights. The bench players were unhealthy, almost every night.

Like it or not, the Bucks are still a development team and have been from the moment they started 18-year-old Giannis at small forward in 2013. This season was designed by the Bucks to be a development tableau for Jabari Parker, who may never become the front line star everyone thought he would be on draft day 2014. The shoe contract came first before the stardom in Parker’s case, and his future is a bit cloudy right now. Trading other players is not the fix for Parker, not this year, with the player himself still a work in progress.

Nobody yet knows who Parker and the Bucks are, so they don’t get in the papers. That’s OK. We don’t have anything definitive to write just yet, and nobody reads the papers anymore, anyway.