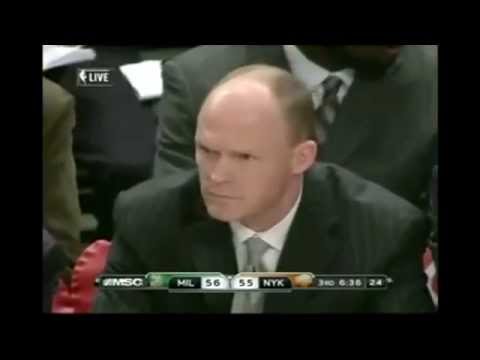 Sometimes Bucks fans just have to scratch their collective heads about the existentialism of Scott Skiles.  Here are the latest “still searching” musings from the man in charge of making Bucks playing time decisions:

”We’re 15-12. I don’t think we’re a finished product yet. We’re still trying to figure out some things.”  — Skiles this past Thursday in the AP story “Bucks in thick of Central race for now.”

27 games into the season and the coach is still trying to figure out some things, still trying to find his team — or find himself within the context of this Bucks team:  The Brandon Jennings-Monta Ellis show with an overstock of power forwards and centers.

In many ways comments like these are self-serving on Skiles part.  The players didn’t start the D-League-level forward tandem of Tobias Harris and rookie John Henson, three Bucks losses until the Bucks bench reversed a laugher in Chicago to bury the Bulls.   Scott Skiles filled out those Frankenstein lineups that sometimes included Ekbe Udoh, sometimes Sam Dalembert, and finally Marques Daniels in place of the very limited Harris.   Sure, the coach was searching, but for what?

The Bucks lost seven out of nine during that forgettable stretch, and there wasn’t a Bucks analyst alive who could figure out what Skiles was doing, other than scape-goating Ersan Ilyasova in full view of Bucks fandom while waiting for the return of Luc Mbah a Moute, the great defender who, more than any other player, has made sense of things for Skiles since he took the Bucks job in 2008.   Moute’s also the only player left from Skiles’ first team.

This last fact, in other ways, shows Skiles’ comments to be veiled criticism (perhaps) of the Bucks front office — which hasn’t agreed with Skiles’ conception of Moute as a starting power forward, and has larded the Bucks with the likes of Drew Gooden, Jon Brockman and Ekbe Udoh at the position, even as Ilyasova has played his way, time and again, into a prominent rotation spot as the Bucks power forward.

And this is precisely where the Bucks and Skiles have found themselves again:  starting Moute at power forward while Ilyasova plays the majority of the PF minutes off the bench and finishes games, with Moute shifting over to small forward and platooning in and out for defensive purposes.

Sanders-Udoh-Przybilla-Dalembert are a weird, four-headed version of Andrew Bogut that plays with only two heads and has watched the Bucks plunge to 26th in the NBA in defensive rebounding (coinciding with the benching of Dalembert);

And Jennings and Moute — and often Ilyasova — managing at times, when they can, to make sense of it all for Skiles and the fans, regardless of what the front office does with the players around them.

When it does, it’s not always clear Skiles knows why it works, beyond knowing that Bucks wins are usually predicated on defense and that they match up well with the Boston Celtics (a 3-wins out of four surprise for the Bucks).

When it doesn’t work, the product isn’t finished (still) and more mad tinkering may be in store from Skiles, the front office or both.

Ridiculous Stat of the Day:  There’s always something that jumps out about these Bucks when one looks at the sort-able season summary stats at basketball-reference, the ritual with which the Bob Boozer Jinx editorial board starts its day.  With the Miami Heat in Milwaukee to play our deer tonight, the board decided it was time to check the Strength of Schedule rankings.

Lo and behold, our 15-12 Bucks have played the 28th easiest schedule in the league.  With the Celtics, Pacers and Bulls (Bucks are 6-2 against their rivals) more average than good so far this season, that’s how it goes.   Playing the Heat tonight will change this stat, but the Bucks head for Detroit on Sunday, back down it’ll go, leaving the Bucks with a hard road ahead in 2013.  Ridiculous.

Ridiculous Stat of the Day II:   As mentioned above, the Bucks are currently the 5th worst in the NBA at rebounding their opponents’ misses.  Ridiculous.

Ridiculous Stat of the Day III:  The career defensive rebounding percentage of little-used Bucks center Sam Dalembert is 25.4% — 10th best in NBA history.  The Bucks with Dalembert starting at center began the season leading the league in defensive rebounding.  Do we think there’s a connection between Bucks rebounding and Dalembert’s playing time?  Absolutely.  Ridiculous.

Ridiculous Stat of the Day IV:  The Golden State Warriors are 20-wins, 10 losses and are tied for 4th in the West with Memphis.   How good will the Warriors be when Andrew Bogut is healthy enough to anchor the defense?   Ridiculous.