Bucks GM John Hammond’s $6 million man will get another chance to prove his worth in Sacramento tonight, as center Andrew Bogut has not yet returned to the team.   Bogut left for “personal reasons” Tuesday in Utah.

UPDATE: As of today (Thursday pregame), Bogut was still gone and the Kings have fired coach Paul Westphal.

So it’s up to the much-maligned Drew Gooden, “the Big Zero,” the man who has seemed in a world of his own as a Buck, to establish a paint presence against Chucky Hayes and the Kings young frontcourt of J.J. Hickson, Jason Thompson and, yep – he’s back from another temper tantrum and fight with the now departed Westphal – DeMarcus Cousins.

These are matches made in heaven for Gooden.  There are no DeAndre Jordans or Blake Griffins on the Kings roster (those two nightmares await in L.A. Friday). The Kings are big and slow and like to throw their weight around, just like Drew.  Pigs in slop?  Something like that.  This will be a rugged game in the paint.

It’s not Gooden’s modus operandii, but he may want to help mind offensive opportunities for his fellow big men, Ersan Ilyasova and Jon Leuer.  Ilyasova started with Gooden in Utah and shot just 1 for 8 in the Bucks’ 71-point offensive meltdown.  Leuer shot 1 for 4.

The Bucks need scoring from their big forwards, no doubt about that, with ill-shooting Brandon Jennings and Stephen Jackson manning most of the perimeter minutes.  Ilyasova, in particular, is due for a good game, and he’ll start on ex-Cav Hickson, with whom he’s fairly well matched and acquainted.  It should be a battle.

But what I’m looking forward to the most is a Leuer vs. Cousins matchup off the bench.  The Bucks will need Leuer to score, and Cousins is too slow-footed to guard the Bucks rookie.  Cousins may be too big for Leuer, but Cousins is susceptible to offensive fouls, frustration, temper tantrums and other drama.

The last time the Bucks were in Sacramento, Cousins committed four offensive charges against Ilyasova and Bogut, fouled out, threw a fit at the refs, and the Bucks prevailed with a strong 4th quarter.

I can’t really think of any two young players who are such polar opposites as these two.  Leuer, the cool, clever, good shooting, in control and fully developed 4-year college player vs. the raw, immature, undeveloped, out-of-control but talented Cousins.    Leuer vs. Cousins:  Book it, this should be fun to watch.

Kings PF/C Jason Thompson is also a handful off the bench.  Bucks shot-blocker Larry Sanders will get his minutes, and plenty of opportunity to wreak havoc above the rim.  Larry is his name.

TEAM TRAINER TEDIUM:  Mike Dunleavy, Jr., is still out with a groin injury and not with the team.  Luc Mbah a Moute is not expected to play due to soreness in his knee.  Beno Udrih is day-to-day with the mashed shoulder he suffered in a collision with Andre Miller on Monday.  Rookie Tobias Harris has not practiced.  Darington Hobson has been recalled from the D-League and will probably play tonight.  Aren’t Bucks injury reports boring?  You bet. 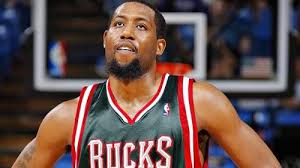 JOHN SALMONS:   The Kings are all about their young guns, Marcus Thornton, Tyreke Evans and Jimmer Fredette, but the old fish is getting his minutes starting at small forward.  Salmons’ defense is just as solid as ever and will likely guard Jackson, who, by transitive property of the 3-team trade, was the guy he was traded for.  Jimmer and Beno, Tobias Harris and Shaun Livingston are the other pieces in this trade, which should make tonight’s game, in the very least, interesting.

Salmons has started all seven games for the Kings and had a workmanlike game playing 30 minutes guarding Kobe Bryant and Ron Artest in a Kings win.  Against the Knicks, he was the best King on the floor during a long stretch in the first half, though he had his hands full guarding Carmelo Anthony.

Sure, I’ll be watching Salmons because he’s not Fredette or Stephen Jackson, but also because GM Hammond gave up on him far too soon.  The revolving door that is the Bucks backcourt with Jennings is a sign that Hammond probably has ADD.

STATS CHECK:   The Bucks remain 2nd in the league in team defense giving up just 95.2 pts per 100 possessions, tied with the Bulls behind Denver.  The Bucks are 2nd in forcing turnovers (17.5% turnover rate) and 2nd in defensive field goal percentage, holding opponents to a woeful 44.4% effective shooting.  (Effective shooting counts one made shot for a made field goal and 1.5 made shots for three-pointers.)

But they’ve plunged to 28th in the NBA in team offense,  scoring only 96.5 points per 100 possessions, causing fans throughout Bucksland to wonder whether this is what we get with Jennings at the point.  There may be limits to how much the Bucks can improve from here.  Even baby steps would be welcome, given the strength of the defense.

With that in mind, most troubling is the Bucks defensive rebounding, which has fallen to 71%.  They are not protecting their defensive backboard very well at all, despite a reputation as one of the better rebounding teams in the league.

The Bucks rank 24th in controlling the defensive glass, which obviously undermines the great on-the-ball shot defense they’re playing.  This gets more and more surprising with each game it continues.

Not surprising is the jumper-chucking Bucks’ inability to the get to the line.  They’re dead last in Free-Throws-Field-Goal percentage — only 16.4% of their shots have been free throws.

Defensively, the Bucks are nearly opposite:  They don’t allow teams to shoot well but they foul a lot.  26% of Bucks opponents’ shots have been free throws.  Partial blame for this goes to Kevin Love and the T-Wolves loving referees.

24 thoughts on “Gooden time: On the road in the west without Andrew Bogut, Bucks need their “Big Zero” like never before”