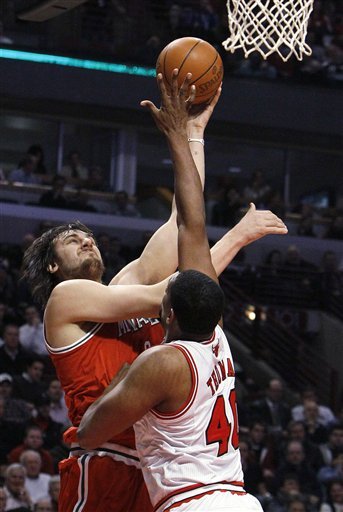 The Packers beat the Bears Sunday in Chicago, 21-14 as even the 3rd world knows by now, but the Bucks couldn’t muster excellence of their own the following night against the Bulls.  Nobody was expecting it of course, but that lead sentence is being written all over basketball American right now, and I wanted to be the first to write it without a question mark after it.

Why?  Because I want badly to belong, to become one with the crowd.  I’ll even prove it right now by referring to the City of Big Shoulders as the Windy City.

No, nobody expected the Bucks to take this one, not with Derrick Rose, the mid-season MVP favorite, dominating every opponent in his path and Brandon Jennings missing his 18th game due to a bone fracture in his foot — and John Salmons out for the fourth game in a row with a hip problem.

The Bulls were up 48-32 at half as the Bucks offense sputtered in the 2nd quarter and Kurt Thomas hit shot after midrange shot.  Ohh, but the Bucks, were good enough (Chris Douglas-Roberts, Ersan Ilyasova, Luc Mbah a Moute and Keyon Dooling at times) to make the 4th quarter look like a good old fashioned battle between budding Central Division rivals.  Final score: 92-83 Bulls.

The score, it should be repeated, was 48-32 at half.  Contrary to the spin Bucks headquarters is selling its fans, Jennings’ backups at point guard have been mostly horrible of late, and it hasn’t escaped notice.  The team, its fans, even Bango the mascot are beyond ready for the return of Jennings, which could occur as early as Wednesday at the BC against the Hawks.

Jennings’ backups, Dooling and Earl Boykins, looked as competent as high school ballers in the presence of Rose.  Maybe that’s harsh, but the 29-14 second quarter was brutal, and Bogut all but disappeared from the offense.  Boykins played only a few necessary relief minutes in the 2nd half, an effective benched-by-Rose decision by Bucks coach Scott Skiles.

48-32 at half.  And this while Ilyasova checked Carlos Boozer to 2 points (1-3 from the floor) and 5 boards in the half; and center Andrew Bogut was hauling down 10 rebounds  in the first quarter to go along with 6 points.  Bogut finished with 18 boards for the game and Ilyasova (17 points) ended with an arguable edge over the Bulls All-Pro forward (14 pts, 9 rebs) who had a strong second half.

Appropriately, Bogut and Ilyasova were the only two Bucks on the 2011 NBA leader board at the midway mark.

Andrew Bogut — Despite back trouble and a lingering virus, the Bucks center solidified his standing as one of the NBA’s few defensive forces.

Rebounding: Across the board, Bogut’s a Top 10 rebounder, but has missed one too many games (7) to qualify for the rebounds-per-game board. Hopefully for the Bucks, that will no longer be the case at the 50-game mark.  His 11.4 boards per game would put him 5th currently, just ahead of Portland’s Marcus Camby.   He’s 12th in offensive rebound % and tied with Spurs center Tim Duncan for 9th in defensive rebounding % (26.4) and Total Rebounding % (18.5).

Ersan Ilyasova — The job that Ilyasova did limiting Boozer to just three shots and two points in the first half of game 42 should not have come as a surprise. He’s earning a reputation as a hardnosed, determined position defender who’s tough for big forwards to beat on the perimeter.

Free Throw shooting by a forward — Ersan is second to none among NBA forwards in free throw percentage, sinking 89.7%, good for 7th in the league. Every other player in the top 10 (Stephen Curry, Luke Ridnour, Steve Nash, et al.) is a guard.

Halfway Down: The Bucks as a team were the league’s worst shooters in the through 41 games, and one of the worst shooting teams in history. It’s a good thing there are plenty of other things to do on a basketball court than shoot the ball.

1. The Bucks are the #6 rated defense, giving up 102.4 points/100 possessions.  The Bulls, Celtics, Hornets, Magic and Heat are the top 5.  The Spurs are #7.  The Bucks clearly play title contender defense.  Do they change what ain’t broke to improve the offense?   Probably not a good idea, as Bucks GM discovered in the first half of the season.

2. The Defensive Glass: Bucks are 3rd in the NBA, pulling down 76.3 % of their opponents’ missed shots.  Only the Dwight Howard Magic and the David West-Emeka Okafor Hornets do a better job protecting their glass.

3. Forcing turnovers:  The strength of a Scott Skiles’ team, as Skiles’ constant pressure defensive scheme forces the opposition to make mistakes.  Skiles’ first two Bucks teams led the league in forced turnovers, however — and the loss of Jennings has something to do with this — the 2011 Bucks were 6th in Turnover % (14.6) at the midway mark.  Interestingly enough, the league leaders are the Memphis Grizzlies (15.6%), coached by Lionel Hollins, a Skiles assistant on the 2008-09 Richard Jefferson/Ramon Sessions team.

4. Opponent shooting: Bucks rank 8th in encouraging the other team to miss, another key to the Skiles defense.  Skiles’ assistants chart “challenged shots” and consider 75% “hand in the face” the acceptable minimum.   Bucks opponents this season have an effective shooting percentage (shooting with .5 added to the “made” column for each 3-pointer made, or efg%) of 48.2%, right behind the opponents of the Magic, Lakers, Pacers and Hornets.  The Bulls 45.9 efg% allowed leads the league, with the Celtics (46.7%) and Heat (47.4%) allowed at #2 and #3,

5. Pace: 90.2 possessions per game is a little slower than Skiles wants the Bucks to play, and even the isolation offense Atlanta Hawks are playing ever-so-slightly faster.  Given the Bucks/Bogut’s abilility to protect the defensive backboard, the Bucks could stand to run a few more times per game, which might mitigate the poor jump-shooting in the half court.

Howard’s Magic, the best defensive rebounding team in the league, run up two more possessions per game in transition than the Bucks do.  The Bulls, a 75% defensive rebounding team in the top 10, break out for about 1.5 more possessions than the Bucks.   …. On the other hand, the Hornets, the other team that protects its backboard better than the Bucks, plays at a slower pace (89 poss/gm) — but then, the Hornets halfcourt offense is run by Chris Paul.  The Celtics (90.6 poss/gm) and the Heat (90.9 poss/gm), both 75% on the defensive glass, quicken the pace only slightly more than the Bucks — but then again, the Celtics and Heat boast some of the best halfcourt offensive players on the planet.  The Bucks don’t, and their center hasn’t been healthy all season.

The 2010 Bucks played at a 91.7 poss/game pace, about one possession per game slower than Skiles’ first Bucks team.

6. Strength of Schedule: Here’s a factor in which the Bucks aren’t looking up at anybody in the NBA.  With the Bulls game, the Bucks moved past the Mavericks (SOS +0.82) and have again played the strongest schedule in the league based on opponent record (SOS +0.96).  This remains the bright side of the Bucks 16-26 record, 23 games of which have been played on the road.  Send out an SOS to Commissioner David Stern and the schedule-makers.

5 thoughts on “Halfway Down: Notes from the midway mark of the Milwaukee Bucks season”