The Bucks first game without injured point guard Brandon Jennings was nothing short of an unmitigated disaster, as the Bucks not only missed Jennings badly but also seemed to forget that they’ve got an All-Star center on their team.  Among those forgetting about Andrew Bogut was Andrew Bogut.  Portland’s LaMarcus Aldridge, playing like an All-Star Center himself these days, showed his appreciation by dominating the Bucks like no other big man has been able to in recent memory.  29 pts, 19 rebs for Aldridge — Blazers won going away, 106-80.

Bogut scored just 5 points and had 5 rebs in 25 minutes, failed to record a block and shot 2-of-7 from the floor.  The highlight of the night for Bogut was a trip to the free throw line, where he made one out of two and bettered his season average to 46.2 %. 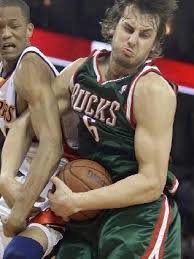 Despite not showing up in Portland, Bogut’s averaging 17.9 pts   12.3 rebs and 3.1 blocks per game since Dec. 4 — his first game back after missing five with back spasms.

Those are All-Star numbers (for eight games) and there’s still room for improvement.  Against Utah Saturday, AB’s four turnovers hurt, marring an otherwise strong game in which he outplayed Al Jefferson.  And he’s still struggling to generate efficient offense.  He’s shooting just over 50% from the floor — not so hot for a center, much less an All-Star center — and because he’s made just 23-of-50 free throws in this stretch, his true shooting % is only 49.7%.

Bogut’s scoring efficiency has to come up if the Bucks have any hope of hanging on in the East standings with Jennings sidelined.  It had to come up even when Jennings was healthy.  Dwight Howard‘s a lousy FT shooter too, but he’s managed 58% true shooting so far this season.

The big positive from the Portland game as the Bucks travel down the West Coast to play the Lakers in L.A. is that the Bucks don’t have to go back to Portland until next season.  History has shown that a Bucks team — even a contending Bucks team — can’t be judged by its performance in Portland.  The last time the Bucks beat the Trailblazers in the Rose Garden was on Jan. 21, 2007 in the Larry Krystkowiak-coached season.  Krystkowiak’s Bucks ended up in the lottery, Larry lost his job and the Skiles era began.

The Bucks shouldn’t be judged by the final score of the Lakers game tonight either — regardless of the outcome.  They’re not supposed to compete against the Lakers with Keyon Dooling at point guard and a roster that has played a single game without Brandon Jennings.

Fact: Until the Portland game Monday, Bogut (36 games) and Luc Mbah a Moute (82) were the only Bucks to play for Scott Skiles without Jennings as their starting point guard.  Mbah a Moute, having played in every game his rookie season (2008-09) is the Games-Played-for-Skiles leader, heretofore known throughout Bucksland as GPS.

While the Blazers and Lakers might as well be pre-season test runs for Dooling, the Bucks are supposed to be able to compete under almost any circumstances with the Sacramento Kings, which makes a win against the Kings on Thursday a swell consolation prize on the Bucks trip West.   Win it and the Bucks go home 11-17 for Christmas, then get ready for a back-to-back showdowns against the Hawks and the Bulls.   May the unabashed judgement of this Bucks team begin then.

The Ersan Factor: The Bucks record when Ersan Ilyasova plays less than half the game (24 mins) fell in Portland to 4-10.*

*Rather long note:  One of the four wins was in Dallas, where Ersan played 23:06.  When Bogut and Ilyasova replaced Jon Brockman and Drew Gooden with 6:31 to play, the Bucks went on their game-winning 14-0 run.  Ilyasova contributed a 3-pointer and a highlight assist to Bogut during the run, and added a layin off a Bogut pass to make it a 16-2 run and a 99-90 Bucks lead with 3 minutes left.

Ilyasova played 22:51 in the Bucks loss to the Heat at the Bradley Center Dec. 6.  Would an extra 1:10 of playing time for Ilyasova made the difference in the game?  Maybe.  Foul trouble cut his playing time in the first half as the Heat built a 14-point lead.  Skiles held off putting him back into the game until the 1:45 mark of the 3rd with the Bucks down 10.  He played the next 11:15 of the game as the Bucks made a run at the Heat but couldn’t get it closer than 3 points — on an Ilyasova jumper.  Skiles yanked him with 2:30 left after he missed a three, grabbed two offensive rebounds and missed a jumper.  Maybe he ran out of gas.  Maybe better substitution by Skiles might have made this game a nail-biter.  In any case, the Heat game belongs in “missing Ersan Factor” loss column if for no other reason than to statistically balance out the 23-min Dallas game, which really belongs in the “Ersan Factor” win column.