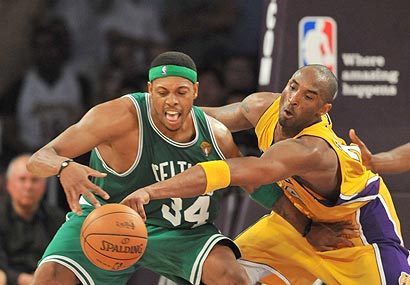 On the night of Game 7 of the NBA Finals, is it time to start thinking about the NBA draft?  Probably not just yet, not when the actual NBA (as opposed to the possible future NBA) is about to play its biggest showcase.  Still, I’m going to play a game here and see if I can hammer out a Bucks draft rundown in the 20 minutes or so that I’ve got before the Celtics and Lakers tip off Game 7.

When is the 2010 draft anyway?  I’m not even sure to tell you the truth. But judging by the swarm of activity at Bucks headquarters in this week, I’d say the draft is coming up fairly soon — let’s call it next week. Good enough, soon enough. Let’s get it over with.

The Bucks yesterday worked out six guys, one of them likely to be the guy they pick at #15.  No, Bucks scouting director Billy McKinney would not come right out and admit that one of the six would be the pick but he might as well have, probably should have — who does he think he’s fooling with quotes like this?

“These are the kind of workouts, last year, as we were preparing for the draft and had Brandon Jennings and the group in, not to say that one of these guys will be the 15th pick, but it’s the kind of workout that we’re looking for in terms of trying to further evaluate to make a decision for the draft.” Billy McKinney, Bucks director of scouting, quote from Bucks Draft Central.

Here are the six, in no particular order except that I do think the first two (Hayward, Babbitt) will be gone when the Bucks pick at #15:

Gordon Hayward, versatile forward who led Butler to the NCAA title game last March. Great floor game, good passer, aggressive scorer. Hayward slip to 15 but that’s doubtful. If he does, Bucks snap him up. The Bucks see him as a perimeter player, either “the two guard, or the three guard,” McKinney said. Yeah, Billy actually said “three guard” in reference to Hayward. I don’t think we’ll see him in Bucks uniform next season.

Luke Babbitt, a 6’9″ scorer and good shooter who was WAC player of the year in his final season at Nevada. He could solve some of the Bucks inconsistencies from the outside, and the Bucks are calling Babbitt an “extremely skilled scorer.”  He’s THE man if he’s still on the draft board at #15. The problem is, the Utah Jazz like Babbitt, too, and they have a top 10 pick.  Here’s hoping the Jazz let Babbitt fall to the Bucks.

Jordan Crawford, 6’4 shooting guard from Xavier, led the Atlantic 10 in scoring as a sophomore this past season. If the Bucks decide that they need a shooting guard more than anything else, Crawford’s the guy.  I think they like Babbitt better, but largely because Babbitt’s 6’9″.

OK, so there was a particular order after all. Not much of a shocker that Babbitt, Hayward and Crawford are the top three guys. I’m a little surprised that the Bucks aren’t looking more at power forwards. PF, as always with the Bucks, is an area of need unless Darnell Jackson (picked up off the waiver wire from the Cavs last spring) can have an impact as a 6’9″-6’10” rebounder.  From the Bucks perspective, having Jackson on the roster is probably about the same, if not better than using a draft pick at PF.

Another big concern (probably the biggest right now other than Andrew Bogut’s health) is that the Bucks may not be able to resign shooting guard John Salmons, which will make finding a scorer a priority.

Lazar Hayward. Bucks fans should know Lazar well enough, of course, having followed his career at Marquette. There’s little doubt Lazar’s an NBA player, and why shouldn’t he be?  He scored about 20 pts per game in the Big East, and at 6’6″ he rebounded tall in the toughest college league of them all.  That’s nothing to snort at. Hayward’s going to make whichever team that takes him very happy over the next few years, precisely what the Bucks were thinking this week in having him in St. Francis with this top group.  Lazar will be a smart pick at #15, and is likely to be gone by the time the Bucks pick next with Philly’s 2nd round pick.

Terrico White.  A shooter from Mississippi. I like the thinking here in looking at the best shooters possible. Carlos Delfino is not going to transform suddenly into a great NBA shooter, nor is he going to improve much at this point in his career. In fact, I’d bank on Luc Mbah a Moute improving his shot more than Delfino improves his.  See the problem here?  The shooting of a few other guys (Brandon Jennings anyone?) is worth mentioning here … but time’s-a-wasting and there was far too much clanking going on in the last two seasons by the Scott Skiles Bucks to account for it while Game 7 awaits.

Darington Hobson. Another scorer, smooth wing player, big guard small forward.  Things must not be going to well in the Salmons negotiations. Sweeten the pot, GM Hammond, sweeten the pot.

Now its 23-14, Celtics with a chance to extend it even further with less than 8 seconds left in the 1st quarter. Ray Allen gets a look at a three but it’s off, 23-14…  one quarter in the books.

Ray has one three for the game thus far (1-3 from downtown), a good sign for the Celtics.  An even better sign is that Kobe is 1-7 from the floor and Pau Gasol is 2-8.   No, they’re not going to shoot 12-60 for the game but Kobe’s out to gun in the deciding game, no matter the outcome. And he takes the first shot of the 2nd quarter …