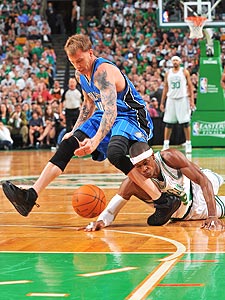 It can’t be written better than Wojnarowski wrote it for Yahoo Sports.  “It” being The Play that has so far defined the 2010 NBA Playoffs.  It … “came out of nowhere, out of Rajon Rondo’s(notes) wildest imagination.

The ball poked into the backcourt, and the Orlando Magic’s Jason Williams(notes) chased it past midcourt and all the way to the 3-point line. He had a good step, maybe two, on Rondo, and just when Williams reached down to pick up the ball, Rondo did something you’ve never seen on the basketball court – one more thing that makes you wonder what in the world can the Los Angeles Lakers do with him.

Rondo dove flat-out, thrust his arm between Williams’ legs, used his right hand to stop the ball and scooped it into his control. When he transferred the ball from his right to left hand, Rondo was still laying on the floor. Williams had watched all of this happen in a blur, and just stood there, blankly, wondering what the hell was happening around him. Rondo bounced to his feet, dribbled hard twice, crossed over the Magic guard and hit a twisting, spinning layup.

When you watch the play again and again in slow motion, take a long look at the fans on the baseline. Eyes wide, jaws dropped, those were the precise expressions. These are the playoffs of Rajon Rondo leaving everyone with a “What the %$&! did he just do?” moment.

The “quarterback” has defined what’s right with the Boston Celtics on their run to the finals — Rondo is everywhere, offensively and defensively, he wants it more than the point guards in front of him, and is making the right decisions running the Celtics offense.  Ray Allen, Kevin Garnett and Paul Pierce are still good enough to make it very difficult to beat the Celtics in a seven-game playoff series, even moreso when their young point guard — next to an offensive liability in 2008 — is making magical plays.

Rasheed Wallace, Tony Allen and Big Baby Davis give the C’s the bench edge. It’s a better bench than the 2008 champions, though not as slick on the perimeter (no Eddie House, Sam Cassell or James Posey). The Celtics are beating teams much closer to the hoop this time around.

For the Lakers, Ron Artest and Andrew Bynum give the Lakers some toughness and tallness that they lacked two years ago.  Artest, in particular, gives them a defensive option on Pierce and Allen that they didn’t have in 2008. However, try as I might, it’s pretty difficult to imagine Ray and Pierce being outmanned by Artest — unless the officials allow Ron-Ron’s defensive mayhem and antics on the perimeter. But I don’t see it bothering Pierce too much, while Allen takes a certain glee in getting Kobe’s goat, dating back to the rivalry that developed when Ray ended up in Seattle in 2003 — “I don’t want to hear my name mentioned in the same sentence as Ray Allen,” Kobe said two years ago. This is no friendly rivalry.

So where does that leave the Lakers?  Kobe’s the man, banged up or not (he’s probably in pretty good shape after a week off) but Pau Gasol’s scowl still doesn’t equal toughness against Perkins, Garnett and Rasheed. A lot depends on  Bynum and forward Lamar Odom. This is not necessarily a bad thing for the Lakers, as Odom is usually an all-around menace against the Celtics, against whom his experience counts more than scowls and antics. For Bynum, the 2010 Finals are another big moment, proving ground to claim a piece of turf in the NBA paint, territory that he’ll be battling for for years to come with the Howard, Bogut (the other AB) and Noah. Gasol will need his help as the Celtics form a crowd near the basket as they did to Dwight Howard in the East Finals. Perkins is two seasons more crafty than he was in 2008, and his new partner in crime is the always volatile Rasheed, more than a match for Pau.

I like Bynum’s chances of having a major impact in this series. Bynum is the only 7-footer in this series, standing out in a mean crowd of 6’10” and 6’11” big men. Wingspan matters, but is Bynum tough enough?  We’ll find out how much the Lakers missed him in 2008.

Prediction: Close to call overall, of course, and I’m loathe to make predictions. The Celtics are playing better basketball right now. That’s worth a few games early on. The longer the series goes, the less I like the Celtics chances. Best way around this dilemma is a duel prediction:  Celtics in six.  But if they can’t finish the Lakers off in LA by game six, Lakers in seven.