Very little except Brandon Jennings went right for the Bucks at the outset of Game 1.  The Bucks missed shots, they turned it over. Josh Smith and Al Horford and the Hawks shooters drained everything they shot.  Luc Mbah a Moute had Joe Johnson corralled (just 2 for his first 7), but early on Joe fed his teammates like his name was Magic Johnson (3 asts, 1st qtr).

What happened next was “oh-no-Scott-Skiles” obvious to everybody who watched it happen — when the Bucks went small their troubles intensified (a 31-12 lead for the Hawks). When they went big (Ersan Ilyasova at power forward and Kurt Thomas at center) things stabilized.  … At the 6:12 mark in the 2nd quarter, the score was 44-29.

A small lineup of Ilyasova on Horford, Carlos Delfino on Smith and John Salmons on Johnson crash landed to a 62-40 halftime score. Let’s not do that again, coach Skiles.

There’s nothing complicated or tricky about the Atlanta Hawks. There’s Johnson, All-Pro guard-forward. Joe’s a 21.3 ppg, 5 assists-per, bonafide star. About 40% of the Hawks offense runs through Johnson on the perimeter or in isolation. … Then there’s power forward Smith and center Horford. They’re a bit undersized for their positions, but it doesn’t seem to matter (I’m not going to mention Andrew Bogut here). They’re strong and fairly good and mobile in the post (30 pts, 19 rebs between them). Their forte is their boardwork and defense, especially Smith, who’s in the air so much on help D that nobody really seems to know (or care) how tall he really is. …  (see below)

Johnson, Smith & Horford, LLC., play heavy minutes – 117 against the Bucks in the 102-92 win in Game 1.  Johnson starts as the shooting guard, gets one break per half around the quarter change, then substitutes in as the small forward. … Backup center Zaza Pachulia breaks Horford 6 minutes per half.  … Joe Smith backs up Josh Smith and a forward named Marvin helps out, too.  …  But Johnson, Smith & Horford, LLC., are on the court most of the time for the Hawks, and most of the time they are on the court together. Coach Mike Woodson generally surrounds his LLC with a rotation of guards (led by Mike Bibby and Jamal Crawford) who shoot rather well.

It’s simple stuff. And there’s simply no going small against Johnson, Smith & Horford, LLC., not with Andrew Bogut in a full-arm cast.

In the 2nd half, the Bucks starters tried again and, with Jennings on fire (34 pts), quickly cut 10 off the Hawks lead.  Suddenly Delfino could guard Smith. Mbah a Moute was kicking Boute on Johnson, denying opportunities; and Horford was no longer killing Thomas. …  Skiles’ first substitution was 6’9″ Ilyasova for 6’6″ Delfino.  Ilyasova was deployed to guard Smith.  Mbah a Moute stayed stuck on Johnson.   The Bucks stayed in the game.

What to look for in Game 2:  More of the Bucks we saw in the 2nd half of Game 1.  Brandon Jennings and John Salmons will have to shoulder the scoring load. Look for Jennings to cool off some but for Salmons to improve on the 6-18 (0-5 on threes) he shot in Game 1.

Skiles shouldn’t even think about releasing Mbah a Moute from Johnson duty (read yesterday’s post on that here).  After starting Game 1 shooting 2-8, Joe reeled off 8 quick points with John Salmons guarding him, part of the Hawks run at the end of the 2nd quarter that put the Bucks down 22 at half. He did it in the paint against the small lineup with Ilyasova at center, scoring on a tip-in, two drives and 2 free throws.

Carlos Delfino needs to have a better start against Smith and get his offensive game (4 pts in Game 1) going in this series.  He’ll have a good run in the 1st quarter, but Ilyasova — not Stackhouse — will likely come off the bench for Del and pick up Smith in the post.  … Ilyasova, listed at 6’9″, appears a couple of inches taller than Smith, also listed at 6’9″. In fact, Ilyasova seems just as long, or longer, than Horford, listed at 6’10”.

Bucks center Kurt Thomas will see the bulk of minutes guarding Horford. Funny, Thomas is listed at 6’9″ too — and appears on my TV to be about the same height as Horford.

How tall are these Hawks, really? 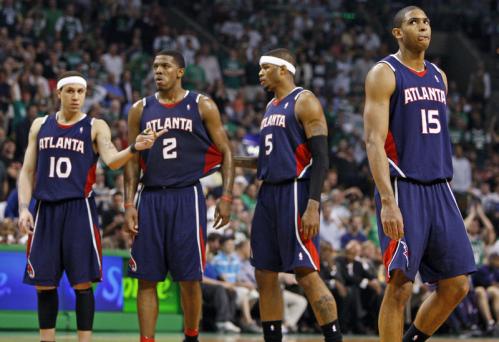 Horford’s in the foreground, so it’s hard to tell with him. But Johnson (2) and Smith (5) are standing even. They appear to be exactly the same height. That’s Mike Bibby next to them, and he’s listed at 6’1″.  Hmm.

We do know that Johnson is shorter than Mbah a Moute. They spent a lot of time together on Saturday and Mbah a Moute is definitely a full 6’8″, same height as Lebron James.  Johnson’s height came up in a Milwaukee Journal Sentinel story today, or I should say it came down … to a published 6’7″.

[Parts of that story in the Milwaukee daily were even cribbed from my story on Luc’s confining defensive work on Johnson yesterday, right down to the Kevin Durant “toughest defenders” reference and noting Luc as a player taller than Johnson. I’m flattered.]

Smith is stepping slightly forward of Johnson, but it looks about equal. I think it’s fair to say that Johnson and Smith are about 6’7″.  Maybe another look at Horford will clear things up further.