We’re still working hard to emigrate the Bob Boozer Jinx archive over to its new home here at BobBoozerJinx.com. The corporate directors have even decided that it’s OK for me to take a break and go watch the Super Bowl.

Before I head out for an evening of football, I do have to make an important announcement regarding the P.O. box to which you’ve all been sending beer money. If your mail has been returned “undeliverable”, this was due to an administrative error in setting up the box, not because the P.O. box was yet another hoax perpetrated by yours truly. Seems that although you and I still get mail from previous tenants at our homes and apartments, postal service will not deliver mail to unregistered “tenants” of a P.O. box.

Who knew? Well, I do now. Point being, said problem has been fixed — it is now safe to resend all that beer money that the post office returned to you. And safe to send more!
So, Bogues, once you get over that migraine that hit you in NY, feel free to resend that check or money order to:

Bogues, I hereby solemnly swear to use this donation in the spirit in which it was given by drinking Foster’s or other Australian beer while watching your Bucks.

Bogut led the Bucks with 21 Saturday despite being slowed by the migraine. By now Pacers coach Jim O’Brien should be a convert to the Bogut All-Star crusade: In the Bucks first game vs. the Pacers, AB led the Bucks with 31 pts, 18 rebs and 3 blks. That’s an average of 26 pts and 13 rebs vs. O’Brien’s Pacers this season (Bucks are 2-0).

With another victory over the Knicks Friday, the Bucks went to 5-1 vs. the Knicks since Scott Skiles became Bucks coach and Mike D’Antoni took over in NY. The Skiles Bucks have never lost to D’Antoni’s Knicks when Bogut suits up. This time, AB played only a few minutes in the first quarter and hit all three of shots before leaving the game with one of those migraines that cripple him at least once per season. Ouch.

The Knicks really don’t like to play defense, and that starts with their coach and his run-and-gun philosophy. It’s fun to watch but worked best when Steve Nash was running the D’Antoni show. Remember that D’Antoni was fired in Phoenix in large part because his no-D system failed time and again to get the Suns through the West playoffs. 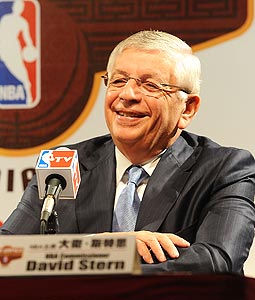 Labor-management strife. Looks the owners are going to play hardball with the next collective bargaining agreement. Much of what’s being said now is probably posturing. Some of it, however, is probably not.

Like Commissioner Stern’s “middle finger,” as one NBA executive put it.