Ersan down, Sessions to go …

The Bucks confirmed another step in the right direction, agreeing to terms with Ersan Ilyasova this week. The 6'9" forward was last in Milwaukee in 2006-07, and spent the last two years in playing in the Euroleague for FC Barcelona. His first year as a pro, he played for the Bucks D-League affiliate.

How old is Ersan? His sheet says 22 so let's go with that. No matter, he's is a versatile player with a much more consistent perimeter game than … oh, say, Charlie Villanueva, and adds some scoring punch to an already versatile, young Bucks frontcourt of Andrew Bogut, Luc Mbah a Moute, Amir Johnson and Joe Alexander.  Cue that "player of the month" video:

The deal is reportedly $7.1 million for three years, $2.1 million next season as the Bucks whittle their way under the luxury tax threshold.

Point guard Luke Ridnour and the Bucks' grab bag of big men — Kurt Thomas, Francisco Elson, Malik Allen and Dan Gadzuric — are the obvious trade fodder that would get them under.

Speaking of trade fodder: Josh Childress says he was "very, very close" to signing with the Bucks. Unfortunately, it wasn't that simple. Childress isn't really a free agent, and the Hawks could've matched the Bucks offer. The Bucks, then, were almost surely investigating trade possibilities with Atlanta. Before acquiring point guard Mike Bibby in 2008, the Hawks pursued then-Sonics point guard Luke Ridnour. That grab bag of big would have come in handy if they were still interested. I also wonder if the Bucks might have tested the Hawks' interest in Joe Alexander, who would have lost his minutes to Childress if both were here.

The Bucks lost their final summer league game 84-83 to the Raptors Thursday on a last second shot by the Raptors' Quincy Douby. Hot-shooting Jodie Meeks had put the Bucks up 83-82 with a couple of late, long range bombs. Meeks finished with 29 pts and Alexander added 19 and 8 boards. I didn't get a chance to post the highlights Thursday, but here they are:

Watch highlights from all five games (and other fodder) here (just scroll down).

That Richard Jefferson left Nets cheerleader Kesha Ni'Cole Nichols at the alter has been weird news that I don't really care too much about. But RJ did go on Howard Stern to explain what happened.

But hasn't RJ for much of the last five years also been linked to international supermodel Teresa Lourenco? 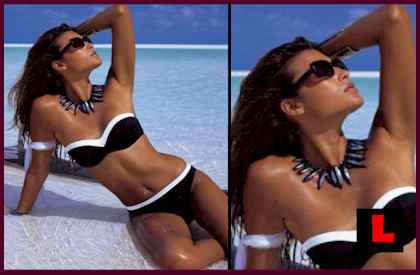