Was the West better than the East this season? The records say so, but don’t believe all the hype about how tough the West is.

There are six patsies at the bottom of the Western conference who padded those 50-win records nicely all season long — and let’s not forget that the Bucks had more trouble with the T-Wolves than they did with the Mavs, Rockets, Spurs, Nuggets and Jazz. …

It’s the matchups, you say? Chicago and Philly both had losing records against the East but won vs. the West — that’s how they got to .500. The Cavs, Magic, Bobcats, Wizards and our very own Bucks fared better against the West than they did in their own conference. The Celtics beat everybody but the Lakers this season, but did win at a higher percentage in the East. The Hawks won against both conferences, too.

How to cut through the schedule disparity? The road test. There are five teams in the NBA with great road records. The Lakers (29-12); the Cavs, Celtics and Magic (27-14); and the Spurs (26-15). The only other team in the NBA with a winning road record is Chris Paul‘s Hornets (21-20), who can beat almost anybody, anytime, anywhere as long as CP3 is on the court.

In the West, this means that only one team has a decent shot at beating the Lakers and their home court advantage: Tim Duncan‘s Spurs, who will be playing without Manu Ginobili in this year’s playoffs. The rest? I’d take the Hawks in a 7-game series against them, more often than not. Don’t let ESPN make me out to be a liar. How many Pistons games did that network foist upon us this season? ‘Nuff said. 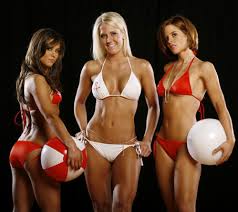 Important note: In case you missed it in Dan’s morning coffee, COED Magazine yesterday posted its “Dancers of the 2009 NBA Playoffs Showdown”. Did you realize that some teams allow women with *** implants on their dance squads?  I just assumed there was a rule against that. Apparently not in Atlanta.

Round 1 Previews – The West

Rockets vs. Trailblazers: I feel bad for Yao Ming. He’s never been out of Round 1 of the playoffs, losing four times. In fact, the Rockets haven’t been out of Round 1 since Stockton and Malone beat them in 1997 for the right to play Jordan’s Bulls in the “one for the thumb” NBA Finals. Tracy McGrady is done for the season, but in these 2009 playoffs, Yao’s got Ron Artest to help Shane Battier in the dirty tricks defense department — and this Rockets team is rock solid in the frontcourt. The backcourt is shaky by NBA standards, but this series won’t be won on the perimeter by the young, inexperienced Blazers, as good as shooting guard Brandon Roy & Co. can be.

An experience-building series for rookie center Greg Oden and the Blazers. Rockets in 6.

Mavericks vs. Spurs: As I mentioned in the pre-mumble, the Spurs are a 26-15 road team. They also played the first quarter of the season without Manu Ginobili and Tony Parker and still managed to start 12-9. The Bucks beat the Spurs in that stretch without Michael Redd, a feat a dozen NBA teams couldn’t match, healthy or not. Tim Duncan really does make that much of a difference against most of the league. The Spurs will miss Ginobili, but without him they’re still better than the rest of the sub-Laker west.  Tony Parker is playing as well as ever, shouldering some of Ginobili’s scoring, and he has good help in Roger Mason and Michael Finley. On the Dallas side, Jason Kidd still hasn’t proven why it was a good idea to trade Devin Harris for him last season.

Dirk Nowitzki should be able to twist and turn this series back to Dallas for a game 6. The Spurs will end it there. Spurs in 6. Unless, or course, I’m completely wrong here, and Kidd finally shows why trading Devin was a good idea. If that’s the case, Mark Cuban, Spurs in 7. Hornets vs. Nuggets: Here’s the upset of Round 1 in the making. Even Lakers fans have realized that Chris Paul finds ways to win NBA games. The referees are so in awe of him, that they’re often too dazzled in transition to whistle while he walks. Can you blame them? CP3 is the nightmare Round 1 matchup for George Karl’s savior, Chauncey Billups. But then, CP3 is a nightmare for every team.

Did you know that Peja Stojakovic is only 31? It’s true, though he plays like he’s 35 or 36. Denver’s Carmelo Anthony has gotta like this matchup at small forward. James Posey should get a lot of minutes off the bench in relief of Stojakovic in this series. All-Star David West should continue to score at will for the Hornets. And George Karl will find a way to screw this up, right skipper? (Thanks again need4sheed).

Is Chris Paul over George and Carmelo really an upset? It could be a sweep.(Bias warning). Hornets in 6.

Jazz vs. Lakers: Somebody had to be 8th. I thought it was the Mavs’ destiny, but the Jazz lost 7 of their last 10 to fall to the Lakers in Round 1. I don’t like the Lakers any more than most non-Laker fans. (“LAKERS RULE!!!”)  But the team has earned its share of respect. Kobe Bryant and Pau Gasol are the best 1-2 punch in the NBA. After the Celtics bullied them in the 2008 NBA Finals, the Lakers got tougher. Backup guard Trevor Ariza is killing teams off the bench. Andrew Bynum is back in the paint — but the Lakers never needed Bynum to win the West. They need Bynum to beat the Cavs, Celtics or Magic in the Finals.

The Jazz are the same Jazz that dragged the Lakers back to Salt Lake City for a game 6 in the 2008 West semifinals – and lost handily. Deron Williams is still an All-Pro; Carlos Boozer is back from his quadriceps injury; AK47, Paul Millsap and Kyle Korver make for a strong bench; Mehmet Okur is still at center … On paper the Jazz appear to be a good mix of power, great shooting and savvy point guard play, coached by one of the best there is, Jerry Sloan.

But they’re not the same Jazz. Things have gone stale in Utah. Lakers won’t sweep this, only because Derrick Fisher can’t guard Deron. Lakers in 5.

1 thought on “NBA Playoffs: How the West will be won…”