Did the Badgers earn an NCAA tournament berth? The short answer is NO. The Badgers needed a win in the Big Ten tournament to lock up a bid. They didn’t get it.

The long answer has something to do with the bad feeling I woke up with today. I just don’t think it’s going to be a stellar day for Wisconsin sports, and it has nothing to do with the Bucks, badly in need of a win and playing the NBA champs in a few hours at the BC.

It doesn’t have anything to do with the Marquette, either. The Gold’s a sure bid, with chances of making the Sweet Sixteen look as good as anybody’s, as long as Buzz WIlliams remembers to keep the ball in the hands of NBA-ready Jerel McNeal.

No, the feeling is definitely about the Badgers… The Badgers and The Committee, that board which decides who’s in, who’s out, who goes where and who plays whom. That committee which has never been kind to the Wisconsin Badgers men’s basketball program — less so it seems since Dick Bennett’s Badgers went west nine years ago and cruised to the Final Four by simply being the only team in the West Regional familiar with a defensive crouch.

So the Badgers made a shamockery of the college game once upon a time. The Committee has foiled them ever since with ludicrous seedings, “home” games in Milwaukee and Elite 8-type matchups in the round of 32. And in true “Rollerball” fashion, all the Committee has ever asked of anyone is that no one interfere with its decisions. Please rise for the NCAA anthem and bend over for another free-gym-bag investigation.

This season, however, the Big Ten has played right into The Committee’s natural bias against cold-state basketball. The Badgers (19-11), Michigan (19-12) and Minnesota (21-9) are grouped together in the mediocrity zone of the power rankings, ranked 42-45. Much like the 6 teams battling for 8th place in the NBA East, no team has managed to distinguish itself above the others and they tend to beat each other up in no particular rhythm or rhyme. …They are a combined 15-28 against Top 50 RPI teams.

Sure, the Badgers finished 4th in the Big Ten. But how will the committee justify sending the Badgers to the Big Dance when Minnesota beat them twice? Send the Badgers and Minnesota and snub Michigan, and how would that square with Michigan beating Minnesota twice in Big Ten play and beating #4 Duke in December?

(EDIT: And let’s not forget 22-11 Penn State, a lowly 70th in the power rankings but somehow tied with the Badgers and Ohio State at 10-8 in Big Ten play.)

The simple solution for The Committee is to file the obvious bids for Michigan State, Purdue, Illinois and Ohio State, then give the Big Ten its due by berthing Wisconsin, Michigan and Minnesota into the tournament — a total of 7 bids for the conference. And Penn State too for a record 8?

There’s that feeling again. Somebody in the Big Ten is going to be very unhappy when the selections are made today, and it’ll probably be one or two of the teams that didn’t beat Duke.

Given the Badgers history with The Committee, those two losses to the Gophers are looming large.

The Bucks are officially 9th in the NBA East standings, thanks to the Bulls whupping Chris Paul and the New Orleans Hornets last night in Chicago. It was about time somebody in the East did this to the Hornets, who’ve had it coming for a couple of weeks. Too bad it had to be the Bulls. Ben Gordon reignited after an off week, and led the Bulls with 27 pts.

It was an interesting run for the Hornets against the East. One, two, three, then four narrow escapes against the teams fighting to get out of the mediocrity shuffle — first the Pistons, then the Bucks, Nets and Philly. They followed that up by blowing out Dallas and the Thunder to move into the fight for home court in the West before dropping a tough one to the Hawks, beating the Wizards and stealing another one from the Bucks. 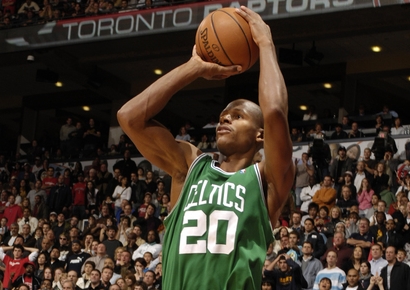 The free throw line: A theme from Friday’s loss to the Hornets was the refs tendency to bail Chris Paul out and send him to the line, particularly in the 2nd quarter when the Bucks were threatening a double digit lead. The Bucks didn’t catch those breaks, a topic coach Scott Skiles addressed yesterday. The Bucks shot a season-low seven FTs against the Hornets, but also spent a good portion of the game firing away from 3-point land.

Skiles is still looking for a complete defensive game from the Bucks, but liked what he saw Friday:

“We felt like their defense was very good and we felt like ours was good for a large portion of the game. They were eliminating most of our penetration, making it a jump-shooting game, and we were doing the same to them.”

Ray and the Celtics: They’ll be without Kevin Garnett (strained knee) for about another week but Leon Powe and Kendrick Perkins have stepped up. Ray likened Garnett’s influence on his teammates’ defensive habits to the good housekeeping example his sisters set for him. He really did.

Celtics injury report: Rajon Rondo started Friday after missing a week with a sprained ankle. Big Baby Davis, also nursing a sprained ankle, did not but may play today against the Bucks. (Big Baby’s home in Boston). Big forward Brian Scalabrine (concussion) will miss the rest of March.

Rebounding: The Bucks, who’ve been routinely outrebounded since Andrew Bogut went on the DL, will need a big game in the paint from Charlie Villanueva against Perkins and Powe. Garnett or no, the Celtics still have a power game. Powe scored 30 and grabbed 11 rebs vs. Memphis Friday.

The Pacers, a notoriously bad road team, are getting blown out in Toronto. A loss will drop them to 28-40, on the verge of planning for the lottery. Andrea Bargnani had the hot hand for the Raptors today, with 27 pts on 9-11 shooting.

A lot of tough defense and not too much good shooting at the BC today. The Bucks simply made more shots in the 4th quarter, winning 86-77.  Plays of the game: The Celtics came out of a time out with 1-1/2 minutes left, Bucks up 81-77. Paul Pierce missed but grabbed the rebound, got it to Eddie House for a 3-pointer from the wing – House missed. The Bucks took it down the floor, ran the shot clock down, and with less than 1 second left, Charlie Bell threw in his first field goal of the night, a three from the left side after nearly losing the ball. Bucks 84, Celtics 77 with 48 seconds left. That was game.

The Bucks were due for a win, and had played the Hornets tough Friday. I never would have thought they could get away with shooting 32.6% (29-89) from the floor and beat the Celtics but the Bucks played four quarters of defense. The Celtics shot 37.7%, including 1-12 from downtown. Ray Allen gave the Bucks a break with a poor shooting game: 2-11 from the field and 0 for 5 from the land of Reggie.

Charlie Bell was 0-5 for the game and 0-2 from downtown until his game-breaking 3 with 48 ticks left.

Rebounding: Bucks held their own on the glass, giving up a 48-47 rebounding edge to the Celtics. Keith Bogans, all 6′-5″ of him, led the Bucks with 12 boards. Luc Mbah a Moute (15pts) and Charlie Villanueva (19 pts) added 7 boards apiece.

Team effort with four players scoring in double figures. Charlie V played a strong 2nd half before fouling out in the final minutes, and led the Bucks with 19 pts. Richard Jefferson had 17.

“I felt it was one of our better defensive games. It’s not too often when you shoot a little over 30% and win the game. I thought we played hard from beginning to end on the defensive end. We were locked in and really moving our feet on the defensive end of the floor.”

Stealing/borrowing this JS photo (and correcting the caption). Luc Mbah a Moute (not Charlie Bell) tangles with Ray Allen in the lane Sunday. That’s a foul, Ray.

The Bob Boozer Jinx, your home for photo cap correctitude.