20 games to go for the Bucks and each and every one of them is big as they fight a growing Eastern Conference rabble for a spot in the playoffs.

This week may be the topper as the Bucks take on THE  two teams stalking them for the 8th place: Devin Harris’ Nets (Tuesday @ the BC) and the new Bulls (Friday in Chicago). Between those critical games, the Bucks face the Lebrons in Cleveland (Wednesday).

Yes, the NBA matters in Milwaukee in March and no amount of March Madness can deny it. The Bucks ability to cling to a playoff position is becoming a bigger story with each game they play without Michael Redd and Andrew Bogut. Coach Scott Skiles is a bonafide Coach of the Year candidate.

But what’s that you say? A 7th or 8th seed in the East isn’t worth much? You don’t have to be good to get one? And it doesn’t matter anyway — the Bucks will be busked out of the playoffs in the 1st round by Cleveland or Boston?

I say this is no time to be cynical or to worry about the Cavs and Celtics (who only seem to worry about each other) unless the Bucks happen to be playing them. In the meantime, the Orlando Magic are the only other team East team that has separated from the pack — and the Bucks are just two games out of 6th place in the thick of a playoff race.

There will be playoff intensity at the BC tonight.

The competition for the final four or five playoff spots in the East is fierce this year. The East may not be as pretty as the teams in the West playoff hunt, but the imbalance of last year is in the past. Every team in the East playoff hunt from current #4 Atlanta to #10 New Jersey is working on a split with the West, the Bucks (11-13) included.

The problem for the East rivals, by and large, has been beating each other (and, since last Friday, beating New Orleans and Player of the Week David West if you’re the Bucks, Nets or Sixers). The East teams that grab the lower rung playoff spots will need to be good in March and April. Nobody’s sneaking into the 8th-spot with 34 wins like Atlanta did last season.

There are plenty of signs for the Bucks ahead (and behind) on the playoff road to encourage and discourage their chances. Here are some of the ones that I was able to read when I wasn’t twiddling with the radio or trying to get the cigarette lighter to work. 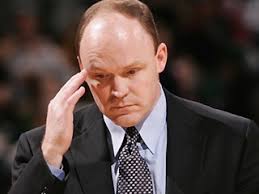 Encouraging sign: The Bucks are coached by Scott Skiles, career record 310-284. Skiles most recently got the Baby Bulls to the playoffs three years in a row (2004-06), playing the same uptempo offense and constant-pressure, in-your-face defense he’s implemented in Milwaukee. Skiles basketball gets teams to the playoffs.

Discouraging: The coaches don’t play the games, and Chicago is now bringing John Salmons and Brad Miller off its bench, along with Kirk Hinrich. Hopefully, the Bulls have too much talent for Del Negro to manage, but … what a nice problem to have.

Dwyane Wade in Miami and Devin Harris and Vince Carter in New Jersey will have a lot to say about how things shake out. The Bucks don’t have that kind of star power. The Sixers don’t either, but earned an experience edge during their playoff run last season. Detroit should just be penalized for all of its recent player drama.

Encouraging: The Bucks have played the NBA’s most games (62) and road games (33). They’ll finally begin reaping in March some well-earned scheduling rewards. Twelve of the Bucks final 20 are at home — and they have 18 days off this month. That’s the luxury of rest, practice, film school and prep time that many of their opponents won’t have playing back-to-backs or traveling on the road.

Discouraging: There really isn’t a discouraging side to the schedule. The competition isn’t light in the Bucks remaining 20, but it’s not backloaded with beasts either. The Heat play the Celtics and Cavs twice each in the next nine games. The Nets play the Celtics, Cavs and Magic twice more, plus the Lakers and go West for a five-game road trip.

If there is a downside, it’s that the Bucks play the Magic three times (2x at home) — but there’s no reason to assume a season’s sweep for the Magic. This is a good opportunity for Skiles to figure out a way to beat Dwight Howard. The Bucks play once against the Cavs, Celtics and Lakers.

Encouraging: The Bucks have the 6th best home record in the East (18-11) and a cushy six-game homestand March 7-21. The first game of the stand is this Saturday, the 2nd night of a Chicago-Golden State back-to-back. After that, the Bucks are schedule for only 6 games in 18 days, the first five at home. That’s almost unheard, and then it gets better. Following the homestand, the Bucks get three down days before playing the Bosh-Marion Raptors in Toronto.

More encouraging: While the Bucks are relaxing and game-planning at home, the Bulls play three back-to-backs and go on a three-game road trip between now and March 21, when they play the Lakers. The Bucks get a crack at evening up the season series with the Bulls Friday in Chicago. Highlight the Bulls game and the Nets game Tuesday. The schedules make it difficult enough for Chicago and New Jersey to make up ground on the Bucks until late March-early April, and the Bucks can gain some control of their destiny this week.

Discouraging: The Bulls have a 2-1 record vs. the Bucks and 10 games remaining against teams in the bottom third of the league, a place the Bucks could still find themselves in before season’s end. The Bucks have no excuses for not taking the Bulls seriously at this point, a problem that contributed to both losses and may yet cost the Bucks a playoff spot. The season opener Oct. 28 was one of the Bucks worst outings of the season; the loss to the Chicago at the BC March 19, the day the Bulls traded half their roster, was a big letdown. It may come back to haunt the Bucks.

Encouraging: The Bucks have no more road games scheduled against Western Conference opponents, who’ll visit the BC six times the rest of the way.

Discouraging: The Bucks may be better off playing Western Conference opponents. The Bucks are 11-13 against the West and 6-9 against the nine West playoff contenders. Against the other top nine in the East, the Bucks are 5-17. Ouch. They have yet to beat Boston, Cleveland or Orlando (0-6), which doesn’t excuse their patsy 5-11 record against their peers in this playoff race. The Bucks this season have feasted on the bottom 1/3 in the East this season, part of the reason NY and Charlotte are on the outskirts of the playoff race. Better them than us.

Encouraging: I’m an optimist. There is time for the Bucks to improve against their East peers. They have 6 remaining games against the Nets (2), Bulls (1), Heat (1), Sixers (1) and Hawks (1). The Bucks are finished with Detroit this season. 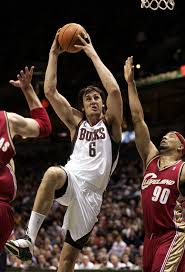 Encouraging: The Bucks will likely need a strong final push in April to get this done, and Andrew Bogut may return to help. A Bogut return April 8 to beat Atlanta at the BC would be the way I would write the script — especially if I was charged with selling 2009-10 tickets to Bucks fans during Brewers season. … Come April 13, I expect Bogut to be on the BC court, guarding Dwight Howard. I’m betting on a Bogut return for the final four or five games.

Discouraging: I may lose that bet. Bucks GM John Hammond is on record saying he won’t bring Bogut back unless he’s 100%. I’d settle for 90%.