No word yet on whether or not Andrew Bogut will lace ’em up tonight against Dirk and the Jasons at the BC (7pm gametime), and no new updates on the injury from Bogut on his website. Bogut had an MRI last week before the Bucks headed west for their 3-game trip, and no structural damage was revealed — “just back spasms,” Bucks training staff says.

Obviously, the 20-24 Bucks need their center back. They were killed on the boards during the west coast trip, capped by a 58-30 trashing by Greg Oden and the Portland Trailblazers Monday.

UPDATE: Bogut won’t play tonight and it’s “unlikely he could return until next week,” JSOnline is reporting. This is good policy by the Bucks, letting Bogut fully heal before committing him to play with a team that isn’t playing Scott Skiles basketball anyway.

Bucks blow out Mavs, 133-99: Just when it looks like some quit gets into the Bucks, they bounce back. In prior seasons, quitting time might have come by now, but then Ramon Sessions, Richard Jefferson, Luke Ridnour, Francisco Elson, Malik Allen, Luc Mbah a Moute and Scott Skiles weren’t around.

Skiles decision to give Sessions extended minutes against Jason Kidd proved to be key for the Bucks in the 1st half. Michael Redd (27 pts), recovered from a bad start and was on fire in the 3rd quarter. The up and down Charlie Villanueva was up after a tough time in the West over the weekend – Charlie led all scorers with 32 points and hauled down 10 boards.

Sessions added 21 pts and 7 assists in one of his most productive games since Redd came back from injury. Skiles stuck with Sessions despite the mistakes (5 turnovers) and that’s the highlight to make on this game, along with the overall solid play by the Bucks frontcourt. R.J. flirted with a triple double (15 pts, 7 rebs, 8 assists) and harassed Josh Howard into a lousy night. After the 1st quarter, the Dallas small forward contributed little but poor shooting (7-18, no assists and just 3 boards), which allowed the Bucks to concentrate on slowing Dirk down.

With the Bucks win at the BC and New Jersey’s loss in New Orleans, the Bucks are back to 8th in the East standings.

Detroit goes big: Amir Johnson started alongside ‘Sheed and Rip Hamilton came off the bench for the Pistons. This allowed Tayshaun Prince to return to his natural position, small forward, and, lo and behold, Prince scored 25 and the Pistons won. Coach Michael Curry would look a lot smarter about the situation if anybody who cared to notice hadn’t been telling him to make the change games ago. It was Detroit’s most lopsided win of the season.

A couple of weeks ago, I sent Bogut a question via his web site “q&a” about the medical treatment he received over the summer playing for Basketball Australia. What I wanted to get to the bottom of is how and why Bogut played in an exhibition game vs. Argentina on an ankle later described by Aussie coach Bob Goorjian as “rolled pretty good”.  After playing one half vs. Argentina (exhibition remember – the game didn’t count) the ankle reportedly swelled up and Bogut was relegated to the bench, which is where he stayed until the first Olympic match vs. Croatia.

Against Croatia, he appeared tenderfooted, and wasn’t much better in game 2 vs. Argentina. The thinking is … if basketball Australia had let the ankle heal rather than rushing Bogut out there, maybe the Bucks center’s back wouldn’t be screwed up. I’m no doctor but a bum wheel can certainly knock a person’s rack out of whack. Things are connected one way or another, and Bogut can’t pinpoint why his back started hurting, only when — Dec. 17 in Philly.

So how and why did Bogut play so soon after rolling his ankle, and what sort of medical treatment did he receive? Here’s what Bogut told me:

“As far as the injury I played through it. Got it taped extra tight, had around the clock treatment: Ultrasound/Bio Stem, Ice and plenty of massage and stretching. Playing through injuries is never fun, but sitting and watching is worse.”

The upshot seems to be that pointing the finger at Basketball Australia, questioning how their team trainers handled injuries (which is what I’ve done) kinda misses the point in Bogut’s case. Bogut was going to do whatever it took to play for his country … “sitting and watching is worse.” A sprained ankle is just a sprained ankle, an all-too-common injury, even if sprains incurred at the Olympics could have contributed to his back problems down the line. 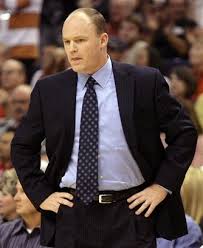 “Our defense has totally gone south on us. We’re not good enough to go out and outscore people every night. Nobody in the league is. That’s been proven. We’ve had a lot of slippage and we have to get our defensive intensity back.”

The Bucks are still a Michael Redd team, coach, and his running mate in the backcourt, Luke Ridnour, is no defensive stalwart, either. When on the court together, Redd and Lucky Luke are not containing anybody or challenging on the perimeter.

The NBA junkies of the world are noticing. Shouldn’t this Bucks team be Skilesier? wonders Kelly Dwyer in this week’s Ball don’t Lie power rankings. “The defense has fallen,” KD notes in ranking the Bucks 17th.

Dwyer, remember, had gotten all misty-eyed over the weekend watching the Bulls beat the Cavs in Chicago, and wrote,

[The Bulls] got back to playing defense, running, and generally making life one big aberration for their opponents. A throwback to the Scott Skiles days, the early days, of forcing teams into giving up when things aren’t going their way.

It seemed like the Bucks were almost there before X-mas and before Bogut was injured, but they have not really been consistent since Redd returned from injury in early December, and it starts with the perimeter defense. Only a trade can fix this, and it looks like the Bucks will be unable to man a 15-player roster next season unless they do something with Redd and his contract (or Dan Gadzuric or R.J.’s), but GM John Hammond seems unable, or unwilling to pull the trigger.

The trading deadline is four weeks away.