Team Redeem, led by Jason Kidd, Kobe Bryant and center Dwight Howard, clamped one of the tightest defenses I’ve ever seen in an Olympics on an inspired, yet overmatched, Chinese team and won easily 101-70. The U.S. threw a full court man-to-man at China from the opening tip on, and didn’t let up on or off the ball until the host team buckled about 15 minutes into it. China, led by Yao Ming, some plucky point guard play and good shooting, impressed the estimated 1 billion TV viewers (and the president in the stands) by weathering the U.S. intensity for as as long as they did. It was the most-watched basketball game in world history.

The Australia Boomers and Bucks center Bogut, unfortunately, had come out two hours earlier and slouched up a sagging man-to-man defense against Croatia that was nearly the opposite of Team USA’s relentless D. The Aussies didn’t stop the ball, overhelped on minor penetration and, as a result, left the deadly Croatian shooters wide open on the wings all game long. The Croats whipped the ball around at will and shot an unheard of 67 percent from the floor, hitting 12-16 three pointers and burying the Aussies 97-82 in a game that didn’t seem that close.

Interbasket has the lowdown on all of yesterday’s games including box scores.

Bogut didn’t play well, and looked as though he didn’t know where he was supposed to be on the court. He only shot three times (3-3) and finished with 10 pts and ONE rebound. He shot 4-6 from the line, turned the ball over four times and had two assists. Croat center Kresimer Loncar outplayed him with 10 pts, 10 rebs. To be fair, nobody on Australia played well. They looked like a drunk rec team with a passed out coach, while making the Croats look more like little Larry Birds than a bunch of guys who grew up idolizing Toni Kukoc (not such a bad role model, judging by this game). If the Aussies don’t find some intensity and a better defensive plan, they might as well go home.

Not a good day for Bucks players:  Michael Redd generally enters the game in the 2nd Quarter as part of Team USA’s 3rd or 4th wave. The idea seems to be that once the relentless U.S. defense has worn out the opponent, Redd’s job is to gun them down with threes. Against China Redd fell flat in his first run and was yanked after playing just 2:45. He didn’t score until the rout was well on in in the second half and finished with 9 pts on 3-9 shooting (3-7 from behind the arc). The USA was again led by Dwyane Wade with 19 and Lebron James with 18 pts, 6 rebs, 3 assists — and its defense. The Team Redeem shooters are not shooting well. Kobe shot 1-7 on threes as he, Redd and Carmelo Anthony shot a combined 4-17 behind the arc. C’mon guys, it’s only 20′ 9″ from the basket. Next up is Angola on Tuesday.

Not a good day for a former Buck:  Yi Jianlian couldn’t get a shot to fall in the first half (0-6) and ended his growing frustration with an “unsportsmanlike” foul before being sent to the bench with about three minutes to play in the half. Although his shot was not falling, I didn’t think he was playing poorly. Physically, he was holding his own, and getting himself some good looks against a tough defense. The shots just wouldn’t fall for him until the 2nd half. ESPN’s Chris Sheridan didn’t see it that way, however, and devoted his post game column to Yi looking worse than one of Beijing’s “smog-filled panoramas.” Ouch. Yi finished with 9 pts on 4-13 shooting.

Sheridan added this tidbit from Michael Redd (also yanked in the first half, remember) on Yi and the New Jersey trade:

“You know, what I did see from him in the fourth quarter was resilience. He struggled, but he was still being aggressive. And as a young player you like to see that out of him. He has a lot of growing to do, but he’s going to be terrific,” Michael Redd said afterward of his former Bucks teammate, who he described as a nice, Americanized kid already well-versed in U.S. street lingo.

To which I responded, “Well, you guys got the better of that trade.”

Bogut ankle injury update:  Bogut moved around fairly well against Croatia, but Aussie media is reporting that their center was slowed by the ankle injury sustained against Angola July 31. This has been a funny injury. Supposedly it swelled the day after the Angola game against Argentina, and was described as a “minor” ankle injury. Four days later, Aussie coach Goorjian was still resting Bogut but saying then that “he rolled it pretty good.”  Bogut may be hurt worse than the team initially let on, in which case the Aussie trainers had no business playing him in the meaningless game against Argentina.

Bogut practiced in the days leading up to Croatia, so I don’t think it’s the ankle that’s bothering him. The Aussies seem to be having problems integrating Bogut into the team mix, and that ankle’s becoming a bit of a crutch for this larger problem. …  Next up for Bogut is Argentina and Manu Ginobili and Luis Scola. Australia built a 19-point lead 3rd quarter lead in the tuneup game Aug. 1 before collapsing in a 95-91 loss.

USA players rave about the Aussies: It’s certainly possible that Croatia was the nightmare matchup for Australia. If Team USA players are any judge of their competition thus far in China, the Aussies chances of winning their first Olympic basketball medal were looking up until Sunday.

After beating the Aussie’s 87-76 in a friendly game Aug. 5, members of Team Redeem deemed the Aussies tougher than European champ Russia and Lithuania — two of the four teams Australia has upcoming in Group A play. Pistons forward Tayshaun Prince:

“I think out of all those teams that we played Australia was the team that had the complete package. They had shooters, they had agressive drivers, big guys who can shoot outside, great ball-handlers who can shoot and drive. All the other teams we played they had shooters but not drivers or drivers but not shooters. With Australia, everybody was able to do something and I think that’s why they were able to stick around throughout the game.”

Bogut didn’t play in that game, and much of the praise centered on Australia’s 20-year-old guard Patty Mills. The backup point guard, who will be a sophomore at Division 1 St. Mary’s (CA) this fall, impressed with his speed and quickness, and had Chris Paul, Deron Williams and Jason Kidd chasing on D. They declared Mills an NBA prospect. “If he continues to work hard he definitely has a future in the NBA,” Kidd said.

Wha’ eh? No game foto from our sheela’s romp against Belarus? Just give the blokes Lauren Jackson’s tits!   You gotta love the Aussie approach to media. The world champion Australia Opals “mauled” Belarus 83-64 to open the women’s Olympic tournament late Friday (as reported by FIBA). Aussie basketball’s official website commemorated the strong start by putting its best chest forward, accompanying the game story with the magazine cover-like shot to your left of Jackson’s jersey-wrapped bazoomas. She had 18 in the game. Did I mention this was done on the official Basketball Australia website?

Give the art director a raise.

Now Jackson’s talking about killing people and broken bones and broken noses. The Aussie and USA women, the favorites to meet in the gold medal game, are having a trash talk war.

Here’s the video (can’t get it embedded).

And here’s what she does when she’s not trashtalking Lisa Leslie: 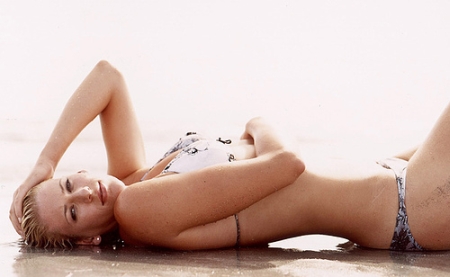